The collection consists of 25,200 pieces of ex libris, New Year cards and other small applied graphics. The dates of the prints are between 1870 and 1989, however, most of them are from the second half of the 20th century. The largest part is represented by works of Czech and Slovak artists (about 20,000 sheets by 500 authors), beginning with small prints by Josef Mánes and Mikoláš Aleš, to numerous sets by Josef Váchal, František Kobliha, Vojtěch Priessig, Karel Wellner, to anthologies of prominent Olomouc graphic artists from 1967 to 1986. Also to a lesser extent, authors from other parts of Europe are represented (in particular from Germany and Austria), and from Japan, America and Australia. In 2005 the collection was extended by the acquisition of 63 pieces of Czech film posters from the 1960s to the 1980s.

Mgr. Marta Perůtková
administrator of the depository and the sub-collections of works on paper
perutkova@muo.cz
tel.: 585 514 273 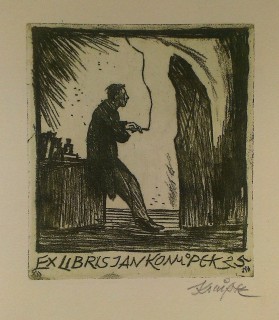