W7 Gallery in collaboration with the Gallery Theatre of Music presents three students painting the Faculty of Fine Arts of the Technical University in Brno choice from the recent series of paintings. Tamara Conde, Jan Svatoš and Martin Valchářová them in their own way tell us about the relationship to the immediate surroundings, people, things and as a persons own consciousness, including the gradual consecration of formed bonds with each other.

With a desire to uncover stories thrown pieces of furniture went Martina Valchářová accidental discoveries on city streets, which began přemalovávat on canvas with a question after their "own way", which is led up to the current hot spots. While noticing their share of wear and that they could have on their former owners. Suddenly abandoned were left to their fate and impact of natural conditions, spontaneously to signing their torso form a gradual coalescence with the new environment. Trying to capture the authenticity of the environment and based on its current cycle of paintings used to draw the phenomenon of free raves and techno scene. Specific subculture follows portraits of actors, along with traditionally associated artifacts. As she says: "I confess an unhealthy obsession, but Im a critical approach, while also point out the bias company and bill ingrained negative label."

Through captured Affairs also Jan Svatoš returning to their own crucial moments and experiences that are tied to his life story. Instead of a self-portrait reveals a custom optic their understanding and perception of the background realistically rendered still lifes and studies alongside structural fragments himself. Opportunity to look through the eyes of the author on his world provides even greater immersion into his privacy. Tight bondage with experience facilitates the capture of the established relation to individual subjects and activities. This is also proven his latest work, which deals with the aesthetics of dirty and clogged nozzles to spray that intentionally displays greatly enlarged for illustrative their option perception as a specific material with a unique structure.

Continuity with the physical aspect of the body, then completely dominated the formation of Tamara Conde. Her longstanding interest in corporeality, awareness of your own being and his physical given rise to several series of paintings, which complements and video, which is concentrated on the hole in the neck and collarbone as extremely fragile point in permanent tension. She began to notice a recurring process of stretching the skin and peculiarities of its folds due to respiration, contrasting with its soft texture. Treats while to the edge abstracted reality of the skin, which in a concentrated view of the detail presented as our own, and the nearest material that surrounds us in a way it defines itself against immediate neighbors and the world. Thorough exploration beige color of the skin resulting in a rich range of colors on the surface, showing the frequency of an ongoing mechanisms and emotions experienced by inside each of us.

Gallery W7 (Wurmova 7, Olomouc) is open according to the Theatre program in tatters, an hour before the performance or by appointment.
www.divadlonacucky.cz/qw7
galeriew7@gmail.com 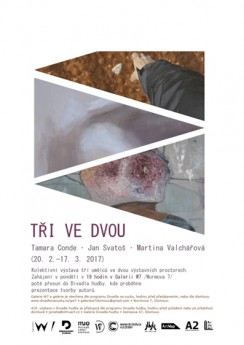