Seven years sought Olomouc Museum of Art to acquire works by world-renowned artist of Hungarian origin, op-art pioneer Victor Vasarely. It succeeded at the end of last year. Mainly thanks to good contacts with Vasarelys grandson and administrator of the estate of art by Pierre Vasarely museum collections are richer for two major acquisitions -tapiserii Harmas (1966) and the image Terek (1951). The museum is from 29 January to 17 May presented to the public. The exhibition will have serigraph borrowed from Fondation Vasarely in Aix-en-Provence in France.

Olomouc Museum of Art organized in late 2007 and 2008 show the formation of a painter, sculptor and graphic artist Victor Vasarely from the collection of Janus Pannonius Museum in the artists hometown of Pecs. "So far, only one profile presentation Vasarelys creation in our country has become a cultural event of the year. An exhibition about eighty paintings, prints, sculptures, but also large-scale tapestries and multiples had an extraordinary response. It was seen by nearly twenty thousand people, which makes it one of our most successful projects, "she reminded curator Gina Renotière, which makes her personal contacts and the French environment at that vernissage arrived and grandson Pierre Vasarely Vasarely. "It is the sole heir and administrator Victor Vasarelys artistic legacy and also Chairman of the Fondation Vasarely Victor in Aix-en-Provence," presented a special guest art historian.

Visit Pierre Vasarely and his sympathy to the activities of the Olomouc institutions were essential for the implementation of the plan to enrich the museum collection of the work of his grandfather. "Mr. Vasarelymu especially liked the idea Olomouc Central European Forum, which includes the creation of representative collections of postwar art Central European countries. For example, our collection of Hungarian art has the Czech state collections season, "added Renotière.

The acquisition was finally able to take place after seven years. At the end of last year and could expand the museum in Olomouc imaginary Christmas gift - Vasarely image Terek 1951 and two half-meter tapestry Harmas from 1966. "Crucial to the success of the transaction was unprecedented support from the Ministry of Culture and the Olomouc Region. Representatives of state and regional governments understand that due Vasarely about our collections as a whole to a higher level, "said museum director Michal Soukup.

Both works represent a significant formation of Victor Vasarely. Picture by Terek Renotière originated at a time when the author was looking for an original artistic style and expressive possibilities explored the language of geometry, which in 1954 described in the famous yellow manifest. "Although not a large format canvas, confirms Vasarely unique position in the European abstraction mid-twentieth century," summarized the curator.

Tapestry Harmas contrary originated in Vasarelys heyday and by Renotière are among his key works. "Squares and circles in color combinations of red, brown, beige and gray in the form of interwoven fields impressive layered illusion," explained tapestry that for the artists watchful eye pitted "royal manufactory" in French Aubusson.

New collection items on show at the Museum of Modern Art complement of 15 serigraphs years 1965-1986, which lent the museum Fondation Vasarely in Aix-en-Provence in France. "Illustrate the authors intention to improve printing technology and elevate screen printing Print media artistic and aesthetic values. Compositional elements composed into millions of variations. Using basic geometric shapes - circle, square, ellipse or rhomboid, and thanks to the unlimited range of colors created a theoretically substantiated origin of the work, in which the rational associated with illusion, "characterized Renotière graphic art by Vasarely.

The exhibition, to which a small museum publishes a catalog will be launched on January 29 and will run until May 17th. 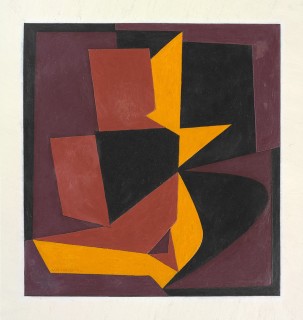 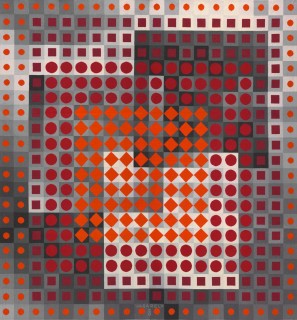