Mozart was born 260 years ago

The world-famous composer Wolfgang Amadeus Mozart, whose 26th anniversary we commemorate on January 27, also visited Olomouc. This is not new, but also can not say that this information is adequately expanded its meaning. For at least a partial remedy to the initiative of the municipality old Olomouc Archdiocese Museum Olomouc, where in 1767 then eleven year old Mozart lived.

How does it with Mozarts journey to Moravia was?

On 23 October 1767, Leopold Mozart, his wife Anna Maria and their children, the older daughter Nannerl and the eleven year-old Wolfgang Amadeus, left Vienna to escape the insidious smallpox epidemic. Originally they intended to stay in Brno, where Leopold Mozart wanted to give concerts with his children. Seeing that the Moravian nobility resided at their country estates at that time, they eventually went to Olomouc with its Bishops Court headed by the art-loving Bishop Maximilian von Hamilton, University and Academy of the Estates.

At first they stayed at the Black Eagle Inn on the Lower Square (Hauenschild’s Palace), but after a few days Leopold complained in a letter to his friend about a bad, damp room with a smoking stove. On top of that, Wolfgang got a high fever, as he had contracted smallpox on the way from Vienna already. Soon afterwards Leopold sought out his acquaintance, Leopold Anton Francis Podstatsky, Earl of Prusinovice, who gave Mozart’s family a retreat in the chapterhouse at St. Wenceslas Cathedral and placed Mozart under the care of his personal physician, Dr. Joseph Wolff. They stayed at Earl Podstatsky’s palace longer than intended as Nannerl too caught smallpox. In a letter to a friend, Leopold Mozart repeatedly emphasized the kindness and hospitality of Earl Podstatsky and mentioned also the poor quality of music produced both at the Dome and the Olomouc theatre, which did not have a permanent building at that time. The Court Chaplain Jan Leopold Hay, later Bishop of Hradec Králové, visited Mozarts children during their recovery and taught them card and magic tricks. A fencing master also visited them and taught Wolfgang how to fence. The Mozarts even met with the then Kroměříž Provost Antonín Theodor von Colloredo-Waldsee, the future first Archbishop of Olomouc. During convalescence Wolfgang composed Symphony No. 6 in F major for two violins, two violas, two flutes and double bass and also an aria for doctor Wolff‘s daughter. On 23 December 1797, the Mozarts set off from Olomouc to Brno, where they gave a concert at the then Taverna, today Reduta on 30 December.

The Inn at the Black Eagle on the Lower Square was possibly the first Mozart lodgings in Olomouc indeed. However, there were two inns with the same name in Olomouc at that time. The other was probably located in the New Street (Nová Ulice) suburbs, situated on the incoming road from Brno. 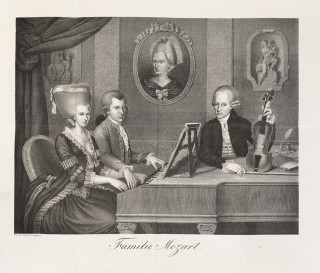 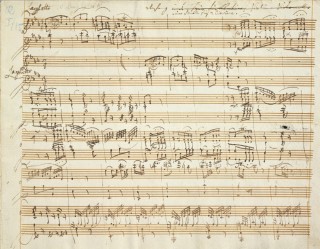 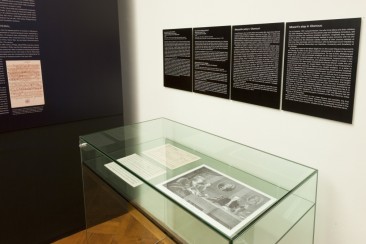 View of the exhibition in Olomouc Archdiocesan Museum.
Related