This rectangular hall with a trough vault ceiling is illuminated by four windows in the west and east walls. The shorter walls feature semicylindrical niches with conches where Rococo tile stoves are fitted. The walls are lined with imitation marble with gilded Rococo carvings.

The figural and ornamental stucco decoration was done by the Kroměříž sculptor František Ondřej Hirnle (1726-1773), the fresco is the work of the Viennese painter Franz Anton Maul-bertsch (1724-1796). The contract for the making of the wall painting was signed by the painter on March 10, 1759. According to the submitted draft and the resultant designs of the painter approved by the Bishop, the fresco was made in the summer of the same year. Preserved sketches are archived in the collection of Austrian Baroque art in Vienna. The four scenes on the walls illustrate major events from the history of the Olomouc Bishopric and its feudal system: the founder of the feudal system Bishop Bruno von Schauenburg before King Přemysl Otakar II, the authorization of the Bishopric’s privileges in 1588 by Emperor Rudolf II, the imprisonment of the Canons of Olomouc during the Estates’ Uprising and the acknowledgement of the loyalty of the Olomouc Chapter by Emperor Ferdinand II. The central part with a number of figures represents the apotheosis of the sponsor of the painting, Leopold Friedrich von Egkh. With the emphasis laid on light and a variable colour scale manifested in a wide range of pastel shades the painting creates a perfect spatial impression further supported by expressive movements and gestures. This elaborate fresco ranks amongst the masterpieces of Baroque Luminism clearly influenced by the Venetian colorist style.

In the centre of the east wall there is the Bishop’s Throne with a canopy on three steps. The hall served for the execution of the secular power of the Bishops of Olomouc and it was the venue of liege (feudal) courts and assemblies. The Bishopric feudal system was established in 1274 by Bishop Bruno von Schauen-burg (1245-1281). The Bishops could grant their property and estates to their vassals as fiefs. They could only be granted to a Catholic nobleman from the Czech Lands. The political and economic relationships between vassals and Bishops were subject to the feudal law. Vassals also had to fulfil their military duties in the early days. In 1779, Empress Maria Theresa replaced the ecclesiastical fiefs with the fiefs of the Czech Crown. Feudal justice was abolished in 1848 and the feudal system of the Olomouc Bishops ceased to exist in 1869. Until then, the liege assemblies were held twice a year. On these occasions, oaths of fealty were taken and disputes were solved. Important documents were filed in liege chests. A significant Bishopric vassal was also the town of Kroměříž. The feudal court was presided over by the Bishop or Archbishop seated in an armchair, while the representatives of the vassals (the liege council) of exclusively aristocratic origin sat on chairs behind a wooden balustrade. The plaintiff read the charge and after voting on the punishment the verdict was announced from the window to the accused who was guarded in the courtyard by members of the Bishop’s or Archbishop’s Guard. Important documents required for individual court sessions were prepared by the librarian and archivist who had free access to the Liege Hall from his office. 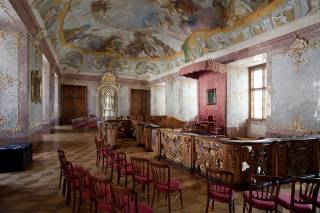 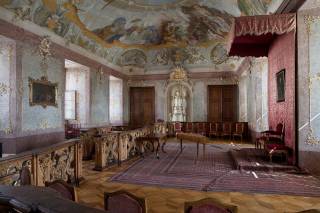 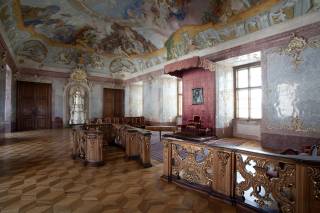