Jan Slovák Entrance to the Gardens | prints and one drawing

Draftsman, printmaker, woodcarver, poet and writer Jan Slovak, a native of Pradliska, situated in a valley between Zlín (13 km) and Luhačovice (6 km), was born on 18 December 1957. From 1972 to 1976 he graduated from high school in Zlín. Subsequently, he studied at Charles University in Prague, philosophy and history (1976-1981). With his wife and three children live in Provodov located about a mile from the important place of pilgrimage Malenisko with a church dedicated to the Virgin Mary Provodovské. Since 1995 he has worked as a secondary school teacher. Currently teaches at the Nursing School and College Zlín medical history, English and social science. The first (day) exhibition was in 1981 at Pradlisku in the barn, then the second two years later in a boiler room at Strahov, where he worked for twelve years as a stoker. With his works, viewers are more likely to meet up since the 90s of the last century (Prague, Zlín, Cumperk Luhačovice, Frydek-Mistek, Prostéjov, Brno ff.). He has published books printing (1996) and Old ordination (2004) and his poetic or literary work published in the Literary newspaper, Background, Area Zlín, Pedestrian Zone, guests, A2 and elsewhere.

Slovákova visual language is direct and unpretentious. His poetics (indeed, even poetic) also draws on the manifestations of popular piety and its meaning for the miraculous, while not present - like folk prints or carvings - the ineffective okrasností form. Yet his artistic language abounds in manly design fits remarkable sensitivity and attentiveness to basic spiritual questions of life and death. In Slovákových works can be seen but also his admiration for the old art, especially the Gothic frescoes (eg. Kopisty, Sázava), at which he, in his words, "especially fascinated by the color of their disappearance, the passing, getting lost - while remaining outline of the ancient story, which is somehow miraculous. "And the miracle author adds:" The Miracles that touches me so, is mainly in inwardness, which reflects compassion, mutual aid man to man. This is another dimension of landscape, garden, trees in places that I know well. Here, the color disappears, uplývají shapes, but the outline - wherein people in front of me - still remains readable. "The work of John Slovak can be perceived as a message of a man firmly resting against a tradition that allows him to breathe freely and not getting lost in the unrest of our time, just as this was and is among painters Jan Knap (born 1949), Ivan Sobotka (1927-2008) or graphics Bohuslav Reynek (1892-1971). 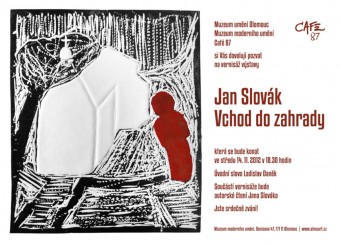 Jan Slovak | Entrance to the Gardens | prints and one drawing
Related