Pavel Konečný collects works known as art brut for more than forty years. When searching for words, how would characterize she said about you that is a collector, not warehouser. He prefers quality over quantity.

In Konečný‘s collection is about five hundred works by fifty artists from the Czech Republic, Slovakia and more recently also from Poland and Italy. Among the rarest works of Anna Zemánková. "Coincidentally came from Hodolany. I have about twenty of her works, and no doubt they are the most precious thing in my collection," said Konečný. Some of her works lent to the current exhibition Flower blooms and other worlds in the Museum of Modern Art.

What appealed to him unprofessional art? "It is hidden in the term insitus, which means pure, unsullied, authentic, original. The authors are people who live everyday, normal lives. However, they have in themselves authenticity and creativity," said Konečný. He appreciated that the authors could access without barriers. "In modern art, I felt a distance and did not see a way to bring artists. For ordinary people, I felt that barrier," said the collector.

Among the first to visit Václav Kudera in Nový Bydžov. Coincidentally, it was the last visit. "Kudera collected old sandstone bollards on the road and from those formed sculptures. We were focused on portraits of our revivalists – Božena Němcová or Karel Hynek Mácha. Now I have this statue from him for four hundred crowns bought," Konečný said. Mácha bust formed the "cornerstone" of his collection. It has placed a place of honor, and all of August this year, will be part of an exhibition at Gallery Z in Velká Bystřice.

The authors recognized personally. "In hindsight, it seems to me the most was a personal encounter with the creator. It is perhaps more important than the thing hell take, that is my only souvenir recollection of the meeting," told Konečný.

For the authors of art brut is specific, it is primarily interested in the process of formation, formation alone. The resulting shape or work for them are not so important. And often their art appear until after death, because they themselves are not paying attention, does not want publicity and their immediate surroundings to be considered as a sort of trait that has more significance.

The final cost for the discovery of spontaneous Italian sculptor Pietro Moschiniho (1923 - 2011), which formed in Tuscania. In the same city as originally Sardinian shepherdess Bonaria Manca. For each of them, then he gave the book a medallion in his own edition series marginality.

His collection of regular exhibits. Just this summer at three locations, in addition to Velká Bystřice and Caesar Gallery in Olomouc. Italian authors will present in January 2017 at the Italian Cultural Institute in Prague. In addition, it organized annually in Olomouc film festival focusing on art brut.

Shot and interest of Pavel Konečný confirms that it is not a simple collectors. Is there anything insit, collects our hearts.

Pavel Konečný (* 1949)
He graduated on Palacky University Olomouc.
In the years 1975-1991 he was head dramaturg in Theater of Music. Then he devoted himself to the care of monuments. Since 2005 until his retirement five years director of the regional office of the National Heritage Institute in Olomouc. 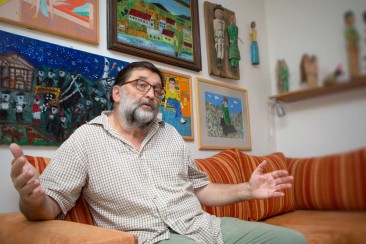 Pavel Konečný and part of his collection 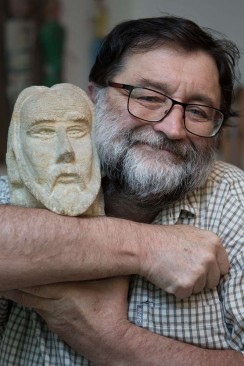