The story of prefabricated houses

History and present selected prefabricated housing in Olomouc region closer to the public from 28 April to 10 July Exhibition story apartment building in the Olomouc region. There will be unusual in the open air, on the border of National Heroes Square and Liberty Avenue. Olomouc exhibition is already the fourth stop wandering project, initiated by the Museum of Decorative Arts in Prague.

"We have shown that all the settlements are not the same, it may not necessarily be monotonous clusters-designed boxes anonymous team in the engineering institute," explained author of the project Lucie Zadražilová of Decorative Arts in Prague. "Prefabricated housing estates have an interesting past, sometimes sad presence and in many cases also has great development potential. But above all - for its inhabitants represent home. It would therefore be a mistake to ignore the individuality of many of them and be influenced by unilateral condemnation, "she added. Panel settlement does not authorize an important urban, architectural and historical phenomenon. "After years of criticism and rejection of unilateral we are witnessing a growing interest in this topic," stressed Zadražilová.

Exterior exhibition will present a diverse quartet of Olomouc settlements and make her portrayal of one of Prerov. Olomouc Norwegian settlements have been built, yet traditional technology, represents the first post-war construction concentrated in Olomouc. In the second half of the 60s originated in projects settlements F1 on new streets and smaller settlements on the Holy Kopečku. The first one represents the characteristic composition of point and tangents home plate dominates the living reservoir. Second, bricks and gabled roofs, from the panel prefabrication clearly disavows. Twilight settlements, but also innovation in urban solutions and type file system brings us Lazce the early 80s. Olomouc selection complements Prerov settlement Šířava the first half of the 60s, twin Olomouc class Kosmonautů.

"The exhibition is conceived as a distinctive panel town. In addition to the stories of selected neighborhoods deals with issues of urban planning, housing dispositions, artistic decoration and building technologies. Does not neglect the question of the age, educational and occupational structure of the local population and how it changed from the time of construction, "explained Martin Mertová, author of Olomouc version of the exhibition project.

Accompanying program to a council estate project prepared in cooperation with the Museum of Decorative Arts in Prague, Olomouc Museum of Art with the support of the Department of Art History FF UPOL. Those interested in architecture can immediately on the opening day of the exhibition, ie April 28 to hear the Art Centre of Palacky University, for example, a lecture on the history of Eva Novotna panel construction with us. Music Theatre will then take place on May 13 lectures Rostislav Švácha and Martin Strakoš.

Grant task prefabricated housing estates in the Czech Republic as part of the urban environment: Evaluation and presentation of their residential potential is a five-year research and exhibition project. Institutional projects under the auspices of Decorative Arts in Prague. The Ministry of Culture supports the project within the grant program for research and development of national cultural identity (NAKI). 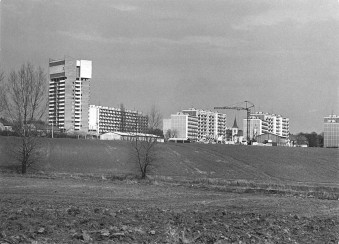