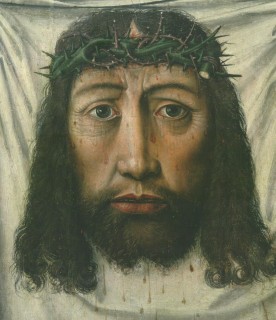 Until September 17th, it will take a week for an exhibition in the Archdiocesan Museum Olomouc - You are secretly in the Oplatka. Visitors can see unique works of medieval artists connected with the Eucharist until Sunday.

The people who visit the Archdiocesan Museum for the Waffle Exhibition are all secretly seen, for example, seeing a unique folding model of the temple of Gods grave. In the seventeenth and eighteenth centuries, pilgrims took home as a souvenir from the Holy Land.

"The model is the only specimen of its kind preserved in the Czech Republic. It comes from a collection of the Salm-Reifenscheidt noble family from the castle in Rájc nad Svitavou. Represents a temple that was built on Golgotha ​​after the conquest of Jerusalem by the crusaders in 1099 over an earlier early Christian chapel containing a rock tomb where the tradition was buried by Christ. The model also documents the shape of the temple after a major reconstruction in the middle of the 16th century, "reminds the curator of the exhibition Helena Zápalková.

The exhibition will also illustrate the almost forgotten Easter rituals, when the churches used a statue of Christ with moving arms ceremonially scanned from the cross and placed in the grave. "During the Easter vigil, the priest placed the statue of the resurrected Christ on the altar, which remained forty days, then, when the liturgical statue of Jesus Ascension hanging on the rope wandered up into the vault of the church, where it disappeared with human eyes in a hollow bolt," explains Helena Zápalková.

Come and discover the mystery and beauty of medieval religious art. The exhibition will take only five days.