Eight former members of the art group The Stubborns arrived this week on a tour of museums and art galleries Olomouc. The first half of 2018 is dedicated to the thirtieth anniversary of the Stubborns. Tripple Nave hall fills their works from the period 1987-1991.

In parallel, authors should either individually or in groups, to exhibit contemporary work in various galleries in Olomouc or in the open air. "I do new things, but just for Olomouc will not do anything in particular, I refer to its internal program," said Róna.

František Skála said that he would rather counting on a sculpture that will be part of another program. "I would have enriched a chamber of things, somewhere in space," he said. Alternatively, would consider something else in Sluňákov where stands his garden as Ark. 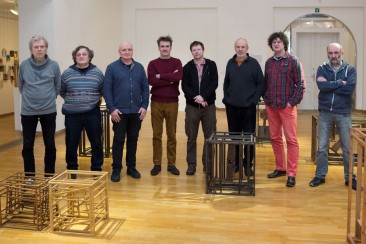