The Olomouc Museum of Art announces an Open Call for artists at the occasion of the exhibition of Jozef Jankovič, one of the most prominent representatives of post-war Slovak art.

National and international artists of all backgrounds and areas are encouraged to apply with their art projects in an electronic form (moving/static image, animation, video, new media).

The application deadline is January 7, 2017.

1) The topic of the flow of time and the reflection of changes occurring in the society (social-cultural, historic, political factors) in relation to an individual; post-conceptual interpretation (electronic image/video in a synergy with a space, an object, the surrounding environment).

2) An intervention in Jozef Jankovič‘s work freely developing his original morphology within your own artistic expression.

3) The use of processes of the common artistic fields in the area of new media and current technologies (after Jankovič who became one of the pioneers of computer graphics in the Slovak visual art).

All artistic projects will be continuously presented on large screens (aspect ratio 9:16 – vertically installed screen in FULL HD) in the Olomouc Museum of Art lobby (from the day of their public presentation until the end of the exhibition, i.e. March 11, 2018).

The public presentation of selected artistic projects in the form of large-screen projections will be held on the premises of Jankovič‘s exhibition in the Olomouc Museum of Art (probably during February 2018, the exact date will be announced).

The exhibition of Jozef Jankovič is being held on the anniversary of his eightieth birthday, at which time the art community was struck with the news of his sudden passing.  Tribute is thus being paid to this leading personality of Slovak sculpture from the 2nd half of the 20th century. In addition to the recommended areas, there is space for open author‘s grasp  and various forms of artistic associations and other events besides the large-screen projection of videos that applicants will be invited to join to the personality and work of Jozef Jankovič. Please, send your suggestions to: opencall@muo.cz

Artists can apply by filling in the Entry Form HERE

More information about the Open Call is in the enclosed document or at the website: www.muo.cz / www.cead.space

Jozef Jankovič belonged to the circle of Bratislava confrontations from the beginning of the 1960s, and he soon won international recognition. The Informel and New Figuration morphology, influences of Pop-Art and the Post-Modernism are captured by Jankovič in a characteristic sculptural approach through which he tells us about the rise and fall of human life, he reflects them on the social level and, with an ironic exaggeration, he touches the existential limits set forth by the life in a post-totalitarian state. He became well-known especially owing to his sculptural group The Victims Warning created in 1967–69 for the Slovak National Uprising Memorial in Banská Bystrica. Besides Jankovičs crucial works from the 1960s and the beginning of the 1970s, the exhibition in the Olomouc Museum of Art (12 October 2017 – 11 March 2018) will show examples demonstrating the artists creative thinking in the following years during which grotesque came to the scene as part of the post-modern morphology and it provided a peculiar rendition of a feeling springing from the pursuit of freedom and the absurdity of situations experienced at that time. 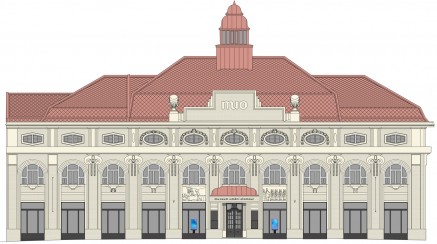 Museum of Modern Art in Olomouc 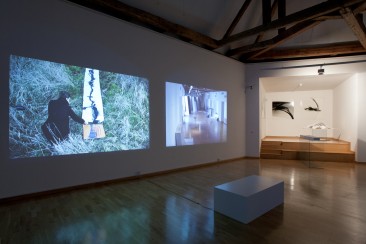 View of the projection in which the authors join to the project of Magdalena Jetelová at her exhibition in the Olomouc Art Museum in 2013 (Photo: MUO - Zdeněk Sodoma)