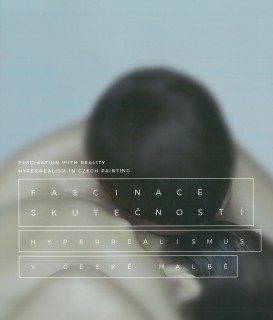 The paintings by Zdeněk Daňka entitled In the Year 2000 are the only self-portraits in the Fascination with Reality. They originated at the turn of the millennium and reflected the fear of survival in 2000.

"The subject came very quickly. I appreciate such pictures that appear to be nothing and this subject has come to me, it could be said already done, "describes the emergence of his image, a 40-year-old hyperrealist Zdeněk Daněk.

"The name of the paintings In the Year 2000, it refers to the contemplation of 2000s survival," explains the author.

Zdeněk Daněk first created a bigger picture of size 190 - 280 cm. On it is shown himself illuminated by the reflectors from the car and between him and the car jump rocks. This was followed by a second image that looks at the same situation, but from a birds eye view.

"After creating the first picture, the appearance of the second image appeared in some strange flash," laughs Zdeněk Daněk.

Both paintings are self portraits by Zdeněk Daňka. Photographs served as a template. "Its also one of the few paintings where I used the photo as a template. Now Im rather trying to do everything by the models or the head, "he says.

He is interested in nature, which is reflected in his works, including those exhibited at the Olomouc exhibition. "I am interested in the protection of nature and environmentalism overall. It is a very important topic for me, "admits Zdeněk Daněk.

The perfect natural scenery in Dávkovas work presents at the Fascination with Reality the painting of Deer park in Chotice before Revitalization. 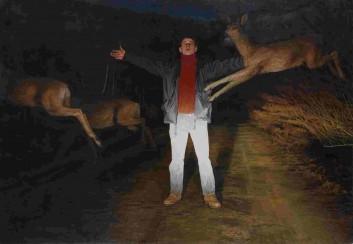 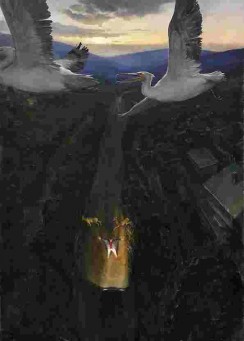