Archdiocesan Museum is an institution of European significance

Archdiocesan Museum Olomouc may be one of the nine award-winning institutions from April pride in the award European Heritage Label. From Brussels it brought to Olomouc boss of the museum Miroslav Kindl.

The title of European heritage celebrating the common European ideals, values and history of the museum for presenting thousands of years of spiritual culture in Moravia. "The Archdiocesan Museum and related Premysl Palace or whole St. Wenceslas hill is a unique place among Europes memory. Settlement hill above the River Morava can be documented as early as prehistoric times. The sacred objects were held and are continuing enthronement Olomouc bishops and archbishops. Hill often in the past has become a place that has changed substantially and determine the direction of the history of Central Europe," said Kindl.

From the award was also pleased curator Gabriela Elbelová. "I am proud that the grounds of the Olomouc Castle and spaces of our Archdiocesan Museum – the place where I am daily moving and intimately know it, become one of the newly discovered icon of European culture," said Elbelová.

According Kindl was not an appreciation of the exhibits, but the common European idea. For Olomouc Museum of Art, which part is Archdiocesan Museum, European Heritage Label is a great honor and opportunity for more intensive exploitation of the tourist potential of the monument. "The title is perceived as confirmation of world-class museums, as well as support options that the object itself and the exposure it has. We are proud of this title, but at the same time it is perceived as a big commitment," commented earlier director Michal Soukup. 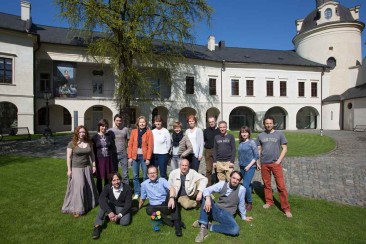 Employees of the museum with the valuation of European Heritage Label.