Angel competition has winners and invites you to the opening

In four artistic disciplines creators and art lovers of art can competed in the search or representations of angels. Receiving works in the exhibition contest Rustle of Angel Wings stopped last January.

"We were surprised at how many people have signed up," commented chief organizer Marek Šobáň from the educational department. He added that the jury ultimately surprised even itself works. "The diversity of materials in sculptures and genre diversity in the photography category," said Šobáň.

The jury eventually agreed that in selected award-winning works will be determined by the order. "No, first, second, third place because every creature has its qualities," said Šobáň.

Most of the exhibits were photographs, but whether they all received images are exposed, it is not yet clear. Given the large number of works and the possibilities of the actual installation.

Opening the competition works is planned at the Gallery Café Amadeus for 5 PM hours on Tuesday 14th February. 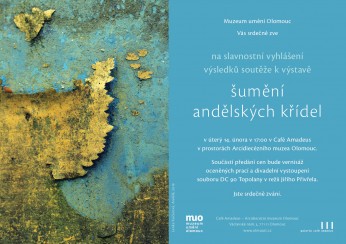