Art history from its establishment as a separate academic discipline methodically itself as a scientific discipline, and from this perspective, it also defines and reflects. As a humanities discipline, which does not deal with the universal laws generally applicable, but rather, reflected the existence of the human body and the company, but operates under its scientific concept, not necessarily as interpretation and as such is theoretically and methodologically open. At the same time responds to cultural and social historical development including the development of exact sciences, which affect its own area of interest.

The science also covers the historical development of art itself, whether by its own nature as a work of art ideas - the concept of its kind, and based on the ability of art to absorb and then interpret and transform scientific or quasi-scientific picture of the world, or exploit scientific discoveries and exploit scientific approaches in their own way and focus. From these viewpoints were on Science and art circles formulated individual sections.

Proposals for their contributions to selected sections should be sent along with brief annotation (max. 1800 characters), title of the contribution and the name of the section not later than 31 March 2015 at the address vybor@dejinyumeni.cz or by mail to Art History Society, the Institute of Art History ASCR, vvi, Husova 4, 110 00 Praha 1. The contribution can be simultaneously sent directly to the address of the guarantor section to which it is administered. 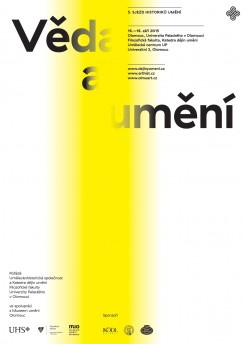