Miramundos music sounds like a soundtrack to travel. The reason is clear, because the group is made up of people of several nationalities, one could say world-class. Such is Brazilian musician and composer Luiz Murá. He comes from Rio de Janeiro but has his Brazilian-Japanese-Portuguese-Italian ancestors, and he certainly does not limit himself to geographical or national boundaries when choosing his teammates. From Brazil he went to the world to look for new music and inspiration, and on his journey he met a lot of musicians and artists with the same gypsy-travelers soul as himself. Miramundo Group was formed on the basis of such meetings.

It happened in Barcelona, ​​a Mediterranean city in the middle of this planet, where it discovered the right place that allowed him to develop the musical link he had brought. The Moroccan gimbrists, Italian singers, flamenco dancers, Brazilian sambst, djembe players from Senegal, Russian bayanists, Mexican mariachi and Romanian gypsies all played the same song but always with a new sound and a new flavor. There were no borders, just music unity.

During that time he met his teammates who now form Miramundo: Agostino Aragno from Italy, Desirée Garcia Miras from Spain and Ernesto Vargas from Mexico. Each one comes from another country and each of them has added to the sound of the band its cultural heritage as well as its passion for music, travel and collaboration with artists from around the world.

Her mission is to share her songs with listeners all over the world, from the most intimate vocal harmonies to the wildest party songs. At the same time, their own stories invite the audience to the magical journey through the world.

From 22.6. In the Municipal Information Center Olomouc (the arcade of the town hall in the Upper Square) and in the venue before the concert. 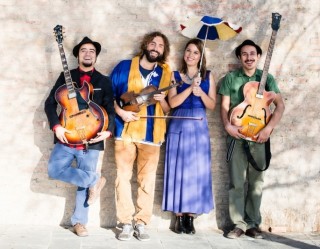 Barcelona music group of people from all over the world