František Drtikol is one of the most prominent Czech and world photographers from the first third of the 20th century. In its initial phase his work was of picturesque romantic landscapes and street scenes (Z dvorů a dvorečků staré Prahy / From the Yards of Old Prague, 1911). Later Drtikol became famous as a portrait photographer and a photographer of nudes. From the beginning of the twentieth century until the end of World War I he was inspired by the period trends of Art Nouveau and Symbolism. From the second half of the 1920s his photographs included elements of cubism and had a strong formal connection to the Art Deco movement. The portrait of the poet Bohdan Kaminský, an author of decadent and symbolist poetry, was taken in the 1920s. At that time Drtikol had his own photographic studio in Prague and he gradually asserted himself as the most prominent Czech portrait photographer of his time. His clients included such famous personalities as President T.G. Masaryk, E. Beneš, Minister of Foreign Affairs, and many artists, politicians and scientists. 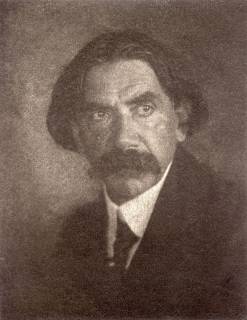