Oil on canvas, 49 × 69 cm. Signed on the bottom left: E. VEITH.
Paper label with blue margins on the stretcher reading: Wahrheit / Lüge / 1200 K.
Olomouc Museum of Art, inv. no. O 2238.
Provenance: The painting was originally deposited as confiscated property (inv. no. D 97); in 1998, it was transferred to the collections of the Olomouc Museum of Art from the Regional Museum in Olomouc (part of the estate of Karel Kašpařík).

A figure painter, portraitist, landscape painter, author of decorative works and wall paintings. He studied at the School of Arts and Crafts in Vienna (Ferdinand Laufberger), then in Paris, from where he travelled to Italy, Belgium, Holland, England, but also to Tunisia. Although he won the anonymous competition for the decoration of the Rudolfinum House of Artists in Prague, he was not awarded the contract due to the antipathy of Czech artists “against the German”. He painted the curtain and decorated a newly built German Theatre (Neues Deutsches Theater), today the Prague State Opera, for which he was never forgiven by patriotic Czech artists. When he joined the architectural studio Fellner and Helmer, having contracts throughout the monarchy, he painted theatres in Vienna (Volkstheater), Berlin (destroyed during the war), Ostrava and Ústí nad Labem and Łańcut Castle. His historicist mosaic dominates the main pedestrian zone in Vienna, where he also won the competition for the decoration of the Hall of Maria Theresa in New Hofburg. Like Viktor Barvitius, Friedrich Woldemar and Gustav Klimt, for instance, he also worked for Haas-Hennig and designed their famous calendars. Although he was mainly active in Germany and Austria (he was a member of the Wiener Künstlerhaus), he was also active in Romania, where there are many of his works. He was also engaged in exhibition activities in Moravia, especially in Brno.

This Olomouc painting is made as an allegorical communication of the secessionists, that Veith identified himself with at the given stage of his career. There are two ambivalent female characters portrayed at the well of knowledge.1 Clearly influenced by Edvard Munch, he highlighted the moralistic symbolism of colours, white in the traditional sense of the pure Truth and Innocence and dangerously attractive red, representing the Lie and Passion ignited by it.

On the edge of the well, there is seated a lofty, almost immaterial figure in lifeless colour, having an impersonal, cold expression. It is the Truth? She does not hide anything, she is only wearing a transparent white veil as a sign of her innocence. The four round points (the number of the world - the divine Quaternity) on her veil in her hair have a symbolic meaning. In this sense, the Truth refers to the order of the world and the universe (four seasons, four phases of the moon, applicable to the four points of the compass or to the whole world), to perfection and beauty.2 The cascading clouds in the sky are the sign of restlessness, constant change, currents, brought about by the winds from the four directions. In this atmosphere, the Truth emerges, showing a mirror to the Lie, breaking the rules. The Lie is huddling under the weight of her guilt on the opposite side of the well. Unfortunately, she has already opened Pandora’s box with the baleful gifts and evils were released into the world; only hope remained at the bottom left.

Veith is being an eclectic of an academic kind here, or rather he has intentionally taken over the composition of the famous painting Thalia (1739)3 by Jean-Marc Nattier, who presented his Muse of Comedy with the mask symbolising “evil” hypocrisy. In the same way, the Lie in Veith’s picture is covering her eyes from the mirror of the Truth, a symbol of moral purification. Looking at one’s own sins should bring one to self-knowledge, which is the only possible way to redemption.

Veith composed the picture in direct relation to Titian’s famous Sacred and Profane Love (1514) now in the Galleria Borghese. It was he who seated on the well of knowledge the Truth and the Lie, that is Innocence, represented as a girl in a white robe, and Sensuality in the form of a richly dressed lady, with a lighted lamp as a symbol of passion. Titian applied ambiguous symbolism - the well of truth with a spring of clear water where an innocent child can wet his/her hand. On the other hand, it is a dangerous well of oblivion for a person indulging in passion.4

The Olomouc painting belongs to the period of Veith’s work close to the style of one of the major representatives of Austrian symbolists at the turn of the century, Wilhelm Bernatzik.1 Also for him, painting was becoming at that time a fairy tale for adults, and as such was adopting the form of a blurred phantasm, a dim vision. Rapid metamorphoses of artistic styles of the period necessarily affected also Veith’s creative expression. Around 1900, he was strongly influenced by symbolism, which is reflected both in the content and the form of his work. The academically brilliant concept of painting was replaced with a lyrical, symbolist vision. A similar style of painting, resembling a dream or distant memories, can be found particularly in the works included in the collections of the Belvedere in Vienna.5 It is a world of dreams and mystery, with the inspiration coming from the outside, from the world of ideas. Veith’s Olomouc work can be interpreted in a similar way.

1. He was trained in the studio of Eduard Peithner von Lichtenfels at the Academy of Fine Arts in Vienna, at Kunstakademie in Düsseldorf and under Léon Bonnat in Paris. He was one of the founding members of the Vienna Secession (he was president of the group in 1902–1903), which he left together with Gustav Klimt.

3. Oil on canvas, 135.9 × 124.5 cm, Fine Arts Museum of San Francisco, Mildred Anna Williams Collection. A similar Portrait of a Lady Wearing a Necklace of Pearls was created by Jean Raoux; this picture from the Musée des Beaux-Arts in Marseille represents the symbolism of pearls in a moralistic-critical meaning. – See more in Mžyková 2013, fig. p. 180. 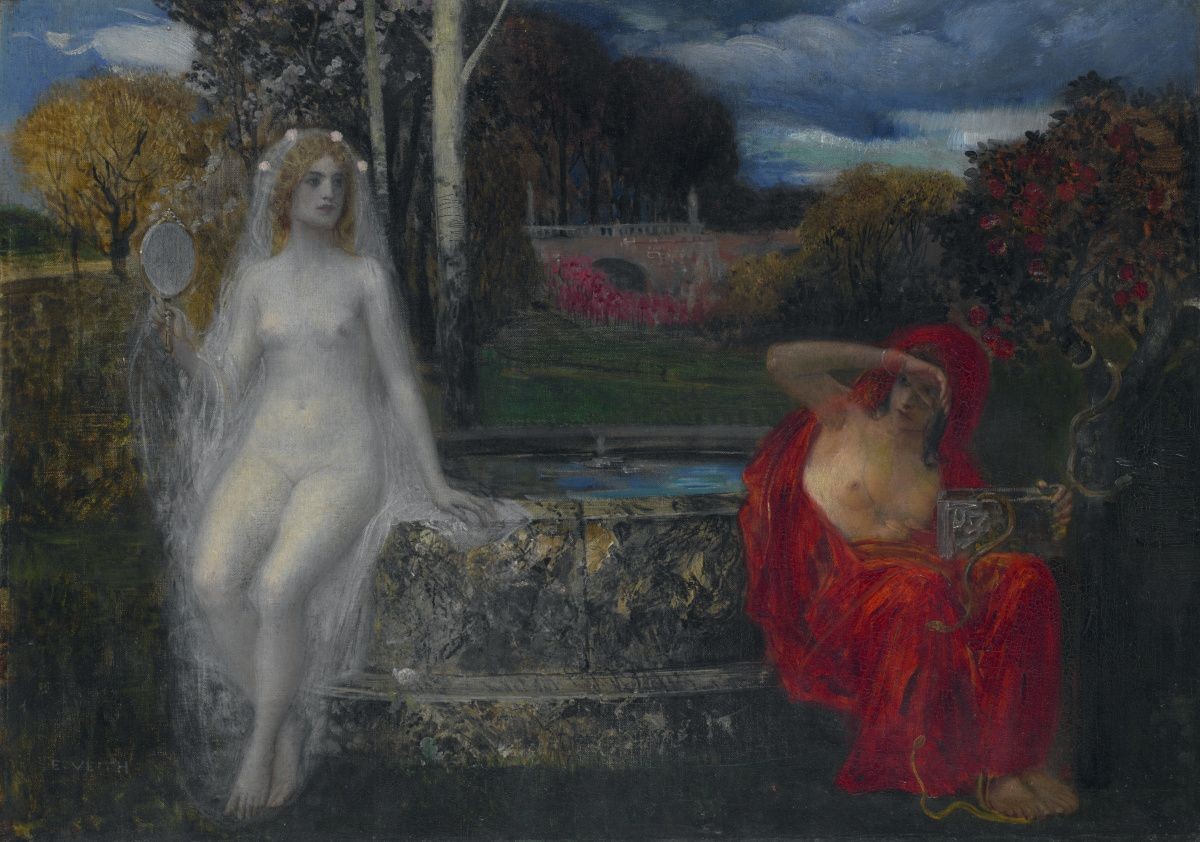 Eduard Veith
The Truth and the Lie, [about 1900]
Related