Indisputably the most significant work of the Kroměříž picture gallery is Apollo and Marsyas, by the main protagonist of Venetian painting in the 16th century, Tizian Vecellio detto Tizian. The theme of the painting is the classical myth from Ovid’s Metamorphoses about the satyr Marsyas who found a pipe thrown aside by the goddess Athena. He improved his ability on the syrinx to such a degree that he challenged Apollo to a music duel, with Apollo playing the lyre. Of course, the god won and he had Marsyas flayed for his daring. The complicated composition depicting the individual participants in the gory scene is almost life size. It includes a thoughtful old man - king Midas, who played the role of judge in the competition. It has been interpreted in many different, often contradictory, ways over the last few decades. One group of researchers (Neumann, Pallucchini, Rapp etc.) consider the painting to be crucial to Tizians work, representing the artists philosophy of life and his intellectual legacy - "Tizians spiritual testament" and an allegory for art, where the higher, cultivated Apollinic music - art, wins over the primitive sounds of Marsyass pipe. In king Midas the observer, they see Tizians self-portrait meditating on the purpose of suffering and death. At the same time, this interpretation enables us to date the painting to the later years of the artists life, ca. 1570 - 1576. A more prosaic interpretation (Ost) is based on the knowledge of a commission placed by Queen Mary of Hungary; a series of paintings on related themes and all of a similar size, for her chateau in Binche near Brussels. The paintings were also based on Ovids Metamorphoses, describing the mythological stories of those who decide to compete with the gods and who are punished as they deserve (Tityos, Sisyfos). At the same time this interpretation assumes the existence of two paintings with the theme of the competition between Apollo and Marsyas and the subsequent retribution, of which only the Kroměříž painting has been preserved. The second version is now known only as a period copy (a private collection in Venice). In that case the painting may be dated to a much broader time period, namely between 1550 and 1576. This interpretation does not exclude the possibility that the Kroměříž painting remained in the possession of the artist, who gradually finished it and even altered the original concept. Numerous changes visible in x-ray pictures and in those from infrared computer reflectography, include the authors overpainting and pentimenti.  A great number of individual layers of the painting also do not exclude this option. The idea that during Tizians life the painting was in his possession, is supported by the alleged way the Countess of Arundel acquired the painting directly from the artists nephew Tizianello in Venice in 1620. However, Tizians painting in Kroměříž is, in the first place, an excellent work with a dramatic plot, and extraordinary painting and colour refinement. The relaxed handwriting and the odd atmosphere of the drastic scene, amplified by the prevailing gold and brown and gilded tones, speak to the contemporary audience over the distance of time, allowing them to develop their own personal interpretations of the classical myth and its artistic rendering. 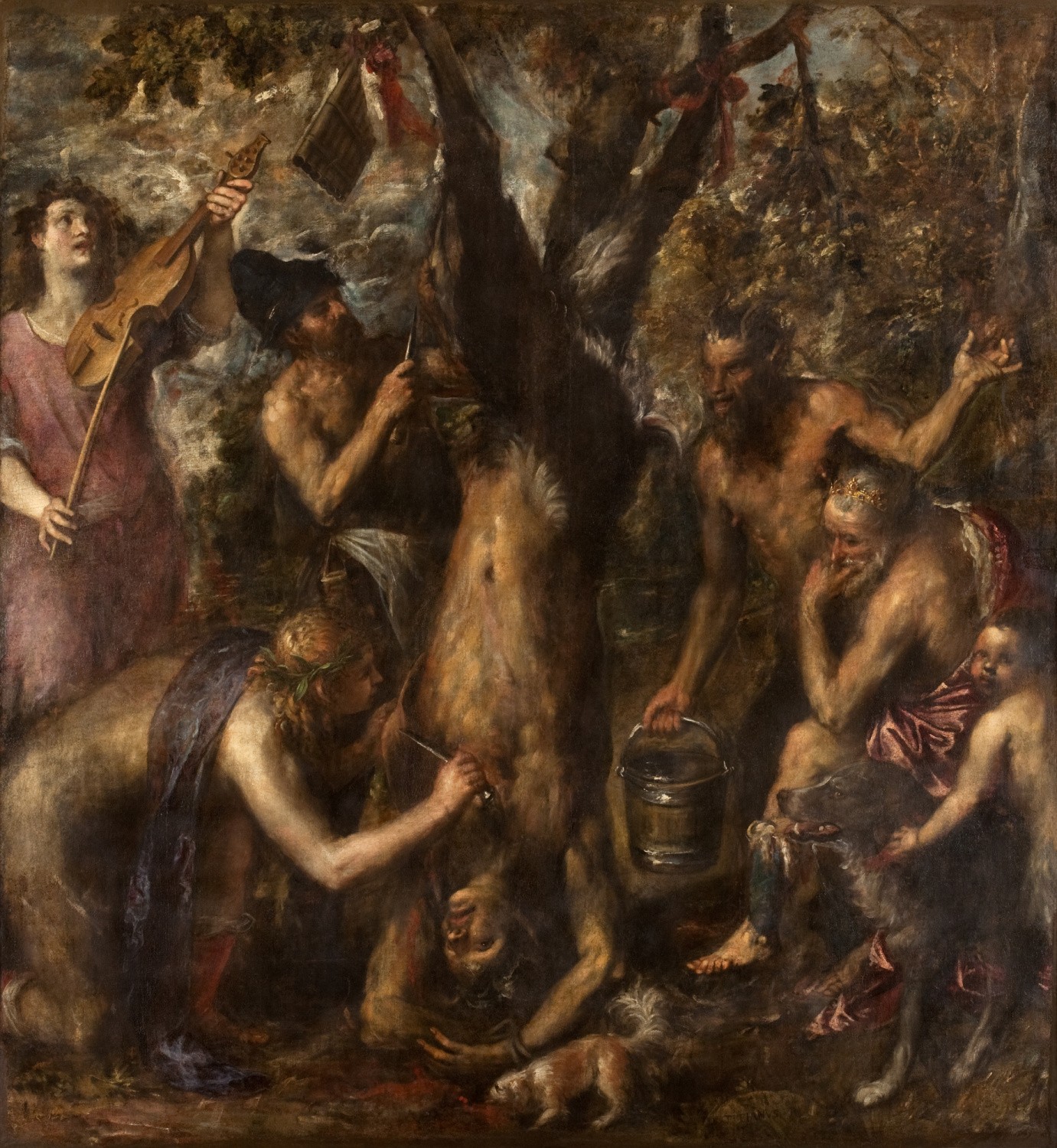 Apollo and Marsyas, after 1550
Related