Váchal was a printmaker, illustrator, art bookbinder, carver, sculptor, writer, poet and thinker. He is one of the most original figures of the Czech art scene. He was the illegitimate child of Anna Váchalová and teacher Josef Šimon Aleš, cousin of painter Mikoláš Aleš. From 1898-1902 he was an apprentice at the Prague bookbinder’s factory owned by Jindřich Waitzmann. His first serious works were created at that time. He was friends with artists and writers, especially anarchistic oriented Bohemians. His father taught him theosophy and esotericism. Váchal dropped out from several art schools due to his nervous and sensitive temperament. Thanks to Mikoláš Aleš, Váchal was admitted to Kalvoda’s private landscape school in Prague in 1904. He left after a year and attended the private school of Rudolf Bém, however, he ended up staying less than year. In 1906 he started carving and, for a short time, attended the etching school of Antonín Hervert. In 1908 he became friends with writers and artists interested in mysticism who were the publishers of a magazine called Meditation. Among them were Jan Konůpek, Emil Pacovský and Rudolf Adámek – together they founded the art group Sursum. At the beginning of the 1910s, Váchal started to work for publisher Josef Florian and created several illustrations for Florian’s book editions. Váchal was highly influenced by his artistic friends, mainly writers and poets and their texts, which inspired him to create his famous illustrations (Otokar Březina, Jakub Deml, František Kašpar, Sigismund Bouška and others), but he was also influenced by some publishers (Kamila Neumannová, Václav Pour and especially Josef Portman). In 1940 he left Prague and moved to Studeňany u Jičína where he lived in the house of his partner Anna Macková. He lived and worked there alone and in poverty till the end of his life. His first posthumous exhibitions took place at the end of the 1960s when the less rigid communist regime allowed it.

The painting Morning Sun is a cleverly composed landscape scene combining an intimate setting of a group of birches in the forefront and a panoramic view of a landscape in the background which is enclosed in a line of forested hills. The composition is typical for Kalvoda’s landscape school as are the birches which were Kalvoda’s characteristic tree. The colours, from silvery grey-greens to bright yellow-greens, also resemble Kalvoda’s supreme paintings from the 1900s. This painting was probably created in 1905. In September 1905 Váchal met Robert F. Wacík (1880-1968) and together they painted “numerous landscapes inspired by Kalvoda’s work“. At that time Váchal was already interested in mysticism, occult philosophy, baroque literature and gory stories and ironically downplayed his paintings inspired by Kalvoda by calling them “lančafty“ (a mangled German word for landscape). He did not hide that he had created these paintings for commercial reasons. Nevertheless, this painting is considered to be a gate to the complex world of Váchal’s work as well as one of the best paintings of Kalvoda’s landscape school. 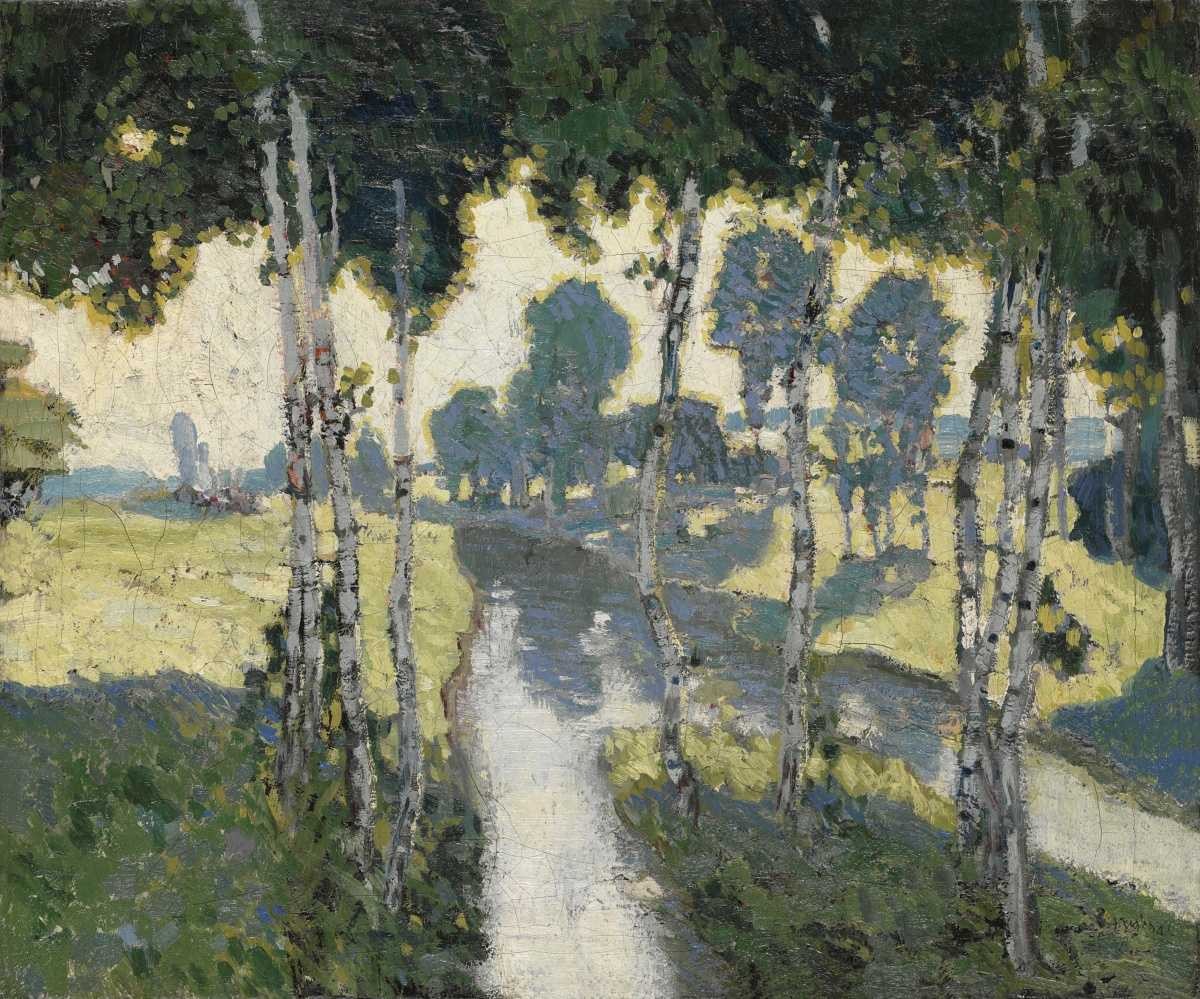