Oil on cardboard, 25 × 33 cm. Signed on the bottom right: Schams p.
On the reverse of the cardboard written (in yellow chalk): konf.
Olomouc Museum of Art, inv. no. O 204.
Provenance: the painting has been part of the standard collection of the Olomouc Museum of Art since 1951.

A genre oriented painter and lithographer, who studied at the Academy of Fine Arts in Vienna. His artistic training was further enhanced in 1854-1855 in Rome. After returning to Vienna, he joined Künslerhaus in 1861. Although his work initially tended to historical themes, from the late 1850s, it is prevailingly genre oriented.

The sophisticated composition of the painting from the Olomouc collections has a dramatic effect. A notary and a Dominican monk are present at the time when an old man with long grey hair is making his last will. His dramatic expression corresponds with the gravity of the decision. He bends over the subject of the will, a map plotting the extensive estate that he apparently owns. The old man’s wealth and the degree of complacency is perhaps illustrated by his casual home clothes, a cap resembling a yarmulke and an expensive fur-lined robe. The scene takes place in a home filled with antiques, with heavy curtains on the windows. His health is obviously critical due to his age, which is indicated by the chair padded with a cushion. Just like the Dutch genre painters, the artist does not fail to show the loyalty of the dog lying at his master’s feet, responding immediately to any stimuli. We follow the storyline through his eyes. He is listening attentively and raising sharply his head, as his master is apparently dissatisfied with the course of the meeting and raises his voice.

This tough, narrative painting in a leaden tone is close to the work of a typical representative of the Düsseldorf genre school, Johann Peter Hasenclever, whose portfolio also includes works called The Last Will and Distribution of the Inheritance (in the collections of the chateau in Hořovice). But one can find works comparable to those of Schams even in Vienna. His painting reminds us, both in terms of content and style, of the Austrian genre painter Josef Danhauser, specifically his pictures related to the last will, such as Opening the Will. Schams’ Olomouc painting, with regard to its subject matter, lacks the usual sentimental tones, but also humorous elements, endowing his paintings with immediacy. 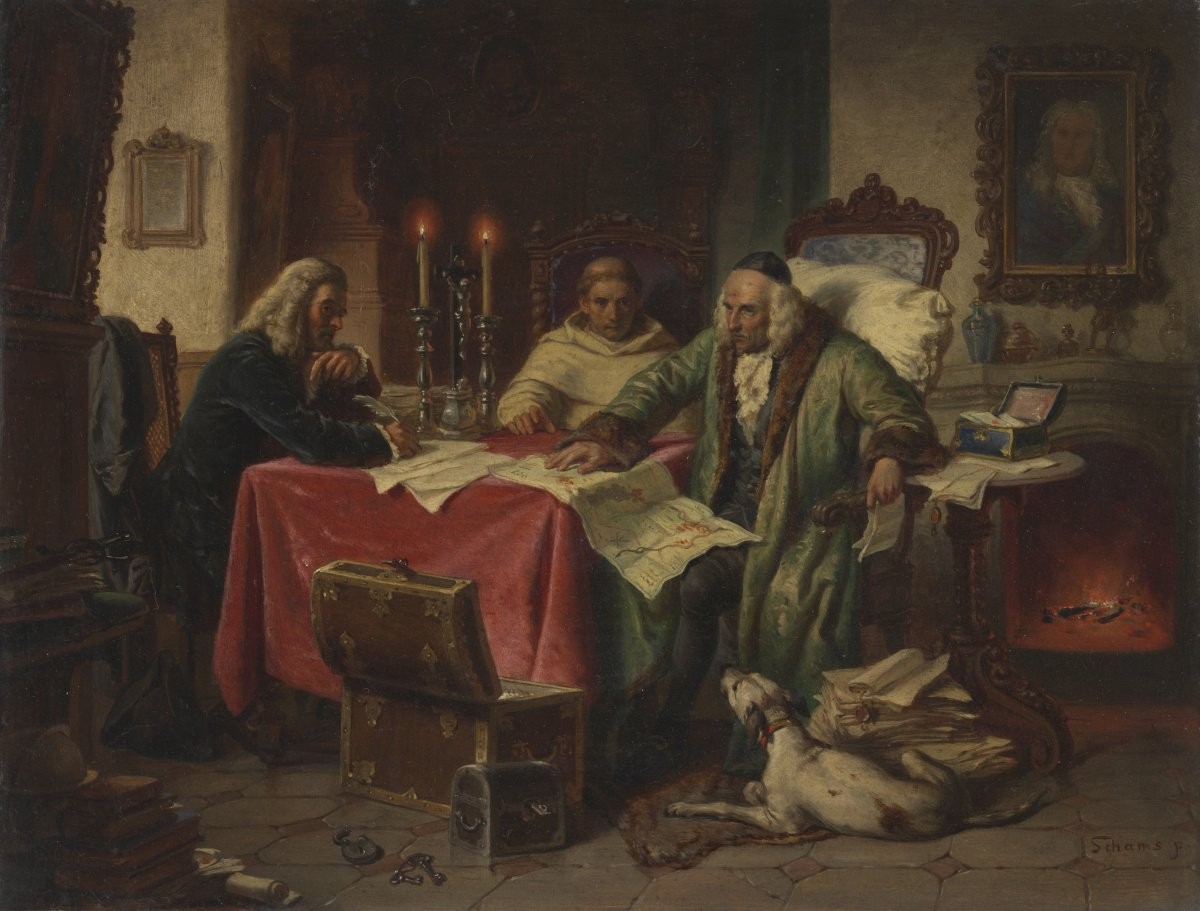 Franz Schams
Last Will, [2nd half of the 19th century]
Related