Jakub Obrovský was a painter, sculptor, printmaker, writer and teacher. He was an important artistic figure and a painter of the then popular decorative paintings. He came from a farmer’s family. His spontaneous talent, stimulated by a passionate romantic personality, led him quite early to the School of Applied Arts in Prague (1897). He studied under E. K. Liška, C. Klouček, K. V. Mašek, S. Sucharda and F. Schmoranz. After his final examinations (1901), he continued at the Academy under Max Pirner and graduated in 1904. Right after that he became a member of the Union of Creative Artists which suited his rather conservative and eclectic artistic thinking. After his military service (1905-1906) and study trip to Italy (1907) sponsored by the Hlávka scholarship, he settled in Prague. His first large public commission was the decoration of the pavilion of banking at the jubilee exhibition of the Prague Chamber of Commerce, after which he gained other prestigious contracts (Industrial Palace, Municipal House, Libeň Palace). Even though, for Czech avant-garde artists, Jakub Obrovský represented an unacceptable conservatism, he was accepted into the artist group Hagenbund (1911) in Vienna, the board of trustees at the Modern Gallery in Prague (1912), the Czech Academy of Science and Arts (1913) and Societé Nationale des Beaux-Arts in Paris (1921). He was appointed the rector of Prague Academy in 1935. After his death, his work was ignored both by the experts and the general public. It was only at the end of the 20th century when his work started to be rediscovered and objectively evaluated.

The title Sleeping Woman with Flowers is probably not an official title, but rather a succinct description of the scene. A half-sitting young woman, covered by a blanket, is holding a bouquet of roses. Her closed eyes depict more than a sleeping person, they represent her inner introvert state of mind. The woman is the artist’s sister Marie who often modelled for him, especially at the beginning of his career. Unlike the portrait called Sitting Woman (Portrait of a Girl) from 1906, resembling Whistler’s elegance, Marie looks delicate and vulnerable in this painting. The atmosphere is emphasized by the colours used: subdued tones of silver, grey, brown and ochre, which differ from painter’s usual lively palette, which is stressed only in the red roses and red details on the drapery in the background.

A painting with a similar composition (no other information) was published under the name Convalescent in the magazine Dílo in 1904. This painting, the predecessor of our painting, is now lost. Another similar painting with the same title and a similar motif is now kept in the Gallery of Fine Arts in Zlín. It is dated 1906 and features relaxed brushwork. A very emotive sketch of his ill sister’s face from 1904, which is obviously – time-wise as well as in the depth, of how the artist was affected by her illness – connected to our painting, emerged in the art market in 2005, but is now, unfortunately, lost again.

This Olomouc painting comes from the collection of prominent Czech aesthetician Bohumil Markalous. His son, doctor Evžen Markalous from Prague, artist and a member of the art group Devětsil, sold the painting to the Olomouc Museum of Art via an antique shop in 1982. Almost every retrospective exhibition of Jakub Obrovský used works from the artist’s collection bequeathed to the Moravian Union of Fine Arts, which is now deposited in the Gallery of Fine Arts in Hodonín. Therefore, our painting has not yet been evaluated in comparison with the representative selection of Obrovský’s work where it certainly belongs. 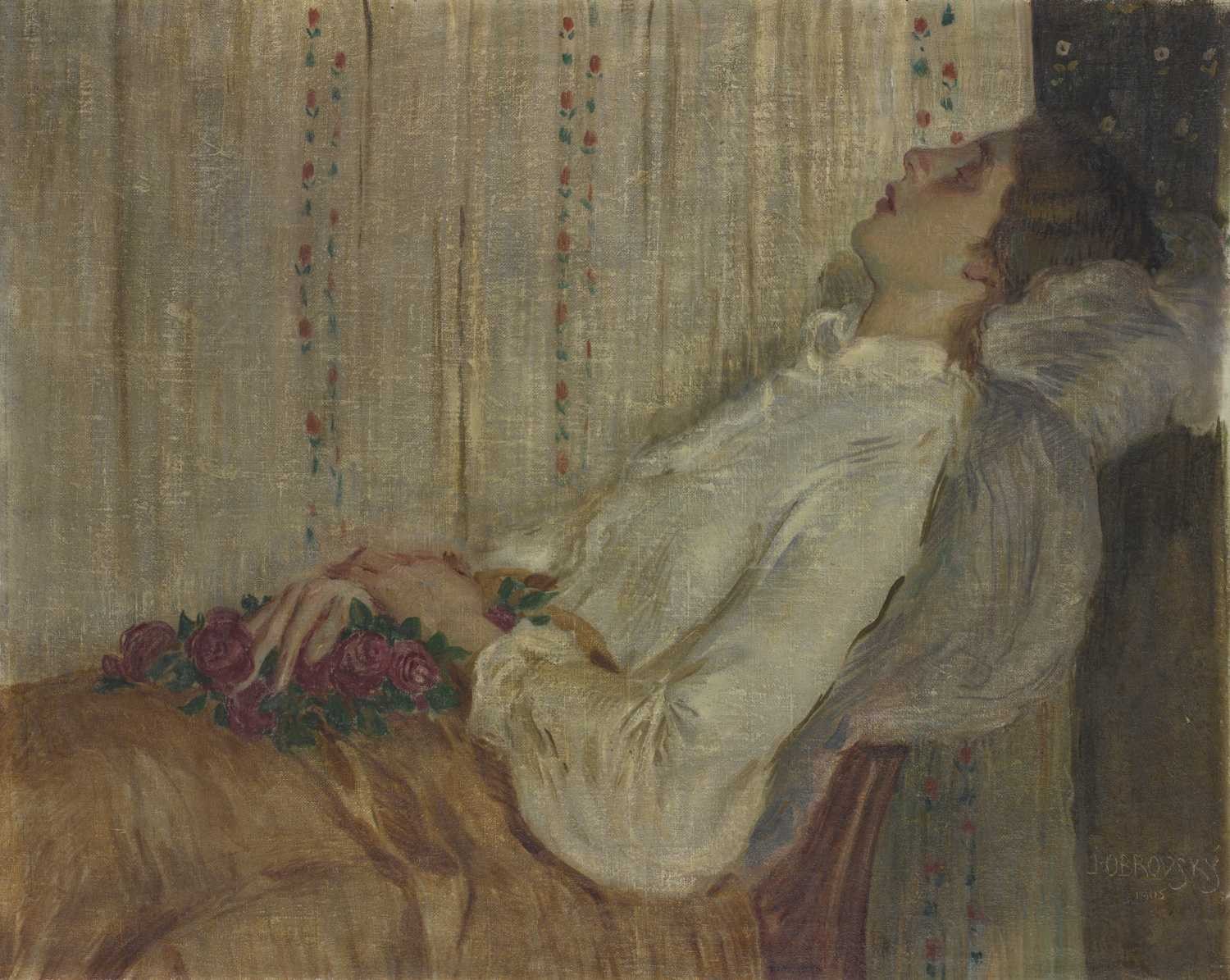