Still Life with Vegetables and Lobster, 1857

A Belgian painter of still lifes and an occasional figure painter received initial instruction from his father, the architect and draughtsman, Jan Baptist de Noter. With his characteristic diligence he painted still lifes with vegetables, seafood and flowers, as well as kitchens and occasionally also genre scenes in the Old Master style, which gained him credit in the art market. It is therefore not surprising that also figure painters, such as Henri Leys and Alfred Stevens, often worked with him. In 1840, Noter moved from Ghent to Brussels and in the 1860s he also worked in Paris, where he exhibited at the Salon from 1853. Around 1864, he shared a studio with the publisher, Jean Adolphe Goupil, one of the most capable art dealers.1 He spent some time with his wife and seven children – of whom Raphaël also became a painter – in the Casbah, Algeria. There, he also painted portraits, some of which he presented to the Algerian National Museum (Musée National des Beaux-Arts d’Alger). In 1872, he published his drawings and engravings in L’Algérie Synoptique Illustrée with texts by Algerian writers. At the end of the 1870s, he settled in France, in the Marengo region. His friend was the former French president, Marshal MacMahon, who was an admirer of his work.

This precise and technically masterful painting by the academically trained artist draws upon the famous tradition of Dutch still life paintings, such as those arranged by Pieter Claes or Abraham van Beijeren. With his ambition to match them, Noter simulated the preparation of a small banquet. He chose an unusual environment, a neutral corridor instead of the kitchen. As a bait placed directly on the tiles, there is a faience plate with a boiled crayfish and a bunch of asparagus. Tangerines represent an allusion to imports from distant lands, that the Netherlands used to be famous for. There are fresh vegetables which have been brought from the garden. The artist plays with colouristically refreshing features, such as the orange of the tangerines, the red of the lobster and the green of the heads of lettuce. A commercial item is a cachepot with flowers, placed on a Baroque footed bowl. A small bunch of pansies neatly placed in the foreground is the friendly act of invitation of an attentive host.

The still life is arranged in the spirit of the traditions and colours of the Old Masters. There is also thoughtful work with space whose depth is enhanced by diagonally laid tiles. Noter also applied the effect of alternating illumination of the essential parts and background, falling into chiaroscuro. In this way he achieved a romantic atmosphere, the faint shadow in the foreground heralding an arriving visitor. 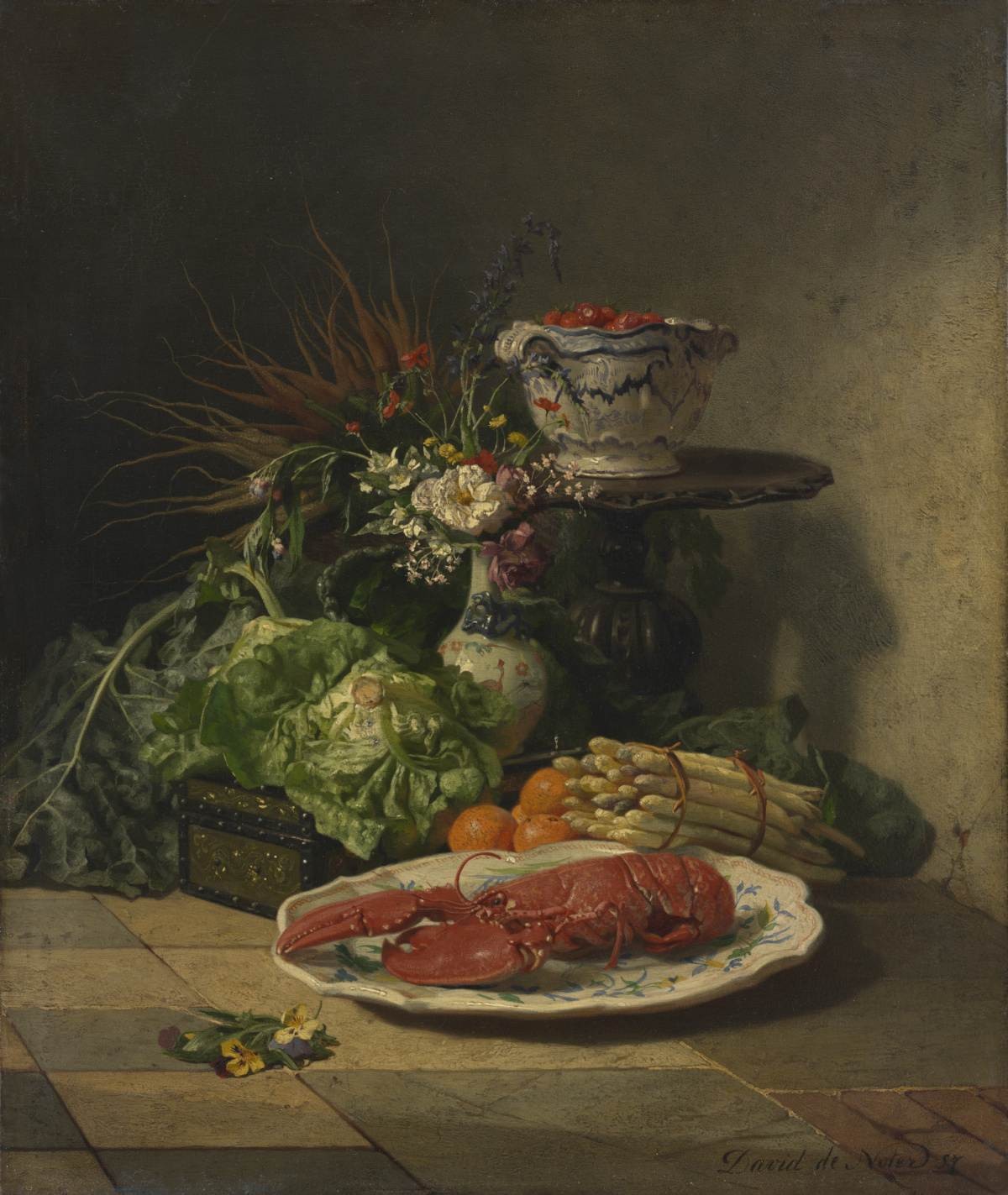