One of the generation of artists surrounding the National Theatre Movement and one of the most significant Czech landscape painters of the 19th century. In the academic year 1852–1853 he visited the landscape atelier of Maximilián Haushofer at the Academy of Fine Arts in Prague. From autumn of 1853 he resided in Munich, where he studied privately with Leopold Rottmann and Eduard Schleich. At the beginning of 1855 he returned and apparently continued in his studies at the Prague Academy. During this time he travelled through the Krkonoš (Giant) Mountains in northeast Bohemia, “Bohemian Paradise”, and Šumava, during which he found inspiration for his first, romantically-laden works. After 1858 he lived mainly in Vienna, where he initially continued his studies. Mařák captured “landscape sections and forest interiors in various atmospheric situations and daily metamorphoses… he was able to express the most diverse moods of forest nooks, clearings, swamps and virgin forests”.1 One of his most significant commissions was the cycle of ten paintings of monument sites in Bohemia and Moravia, which he created in the years 1882–1883 for the vestibule of the Presidential Box of the National Theatre in Prague. He returned to Prague in the year 1887, when he was offered a professorship at the newly equipped Landscape School at the Prague Academy and soon became the school’s rector. His teaching career is highly regarded: he transformed the atmosphere of the school, reformed the curriculum, established a new programmed at the school of landscape painting, and last but not least, put the Academy on good financial footing. He raised and by his example influenced an entire generation of landscape painters, including Ota Bubeníček, Alois Kalvoda, František Kaván, Otakar Lebeda, Jaroslav Panuška, Antonín Slavíček and many others. He joined his students on frequent field trips, during which they painted together in the open air.

In Mařák’s cycle of thirteen charcoal drawings, titled Rakouské lesní charaktery (Austrian Forest Characters, 1878), “a hilly landscape with a stream, an overgrown birch grove,”2 evokes a sad feeling, even though these trees – probably due to their lithe white trunks – are usually associated with happy thoughts. On the other hand, in this Olomouc painting by Mařák, the interior of a birch wood evokes happy, even fairy tale, feelings. The painter here in a nearly documentary way has captured a small glimpse of a grove on a hill. The concentration is on the lower level, where he intentionally severed the tree trunks, depicting the trees without their crowns. He created an atmosphere where the viewer is invited to enter within and discover the depth of the wood and nature in general, “in whose embrace the entire cosmos is transformed into a huge cathedral”,3 where a person can contemplate in privacy and get to know more than only oneself. He made this accurately expressed play of light and shadow on the forest growth, and the play of sunbeams on the tree trunks, the sole content of the painting, which falls into the period at the turn of the 1870s and 1880s, when Mařák began to gradually reduce the expansive views of his landscapes. In small segments of the woods he could focus on smaller details. “I spied into its picturesque corners, I admired the forest glades, paths, swamps, and pools.”4 Paintings of the forest interior and the life found there became the artist’s domain. The contemporary theme of the forest interior truly peaked in the second half of the 19th century and was connected with the transforming relationship of Man to Nature – with the ability to perceive the forest interior as a space which reflects the viewer’s own interior, creating a period of personal calm – and with the appraisal of the city interior as furnishing places of privacy.5 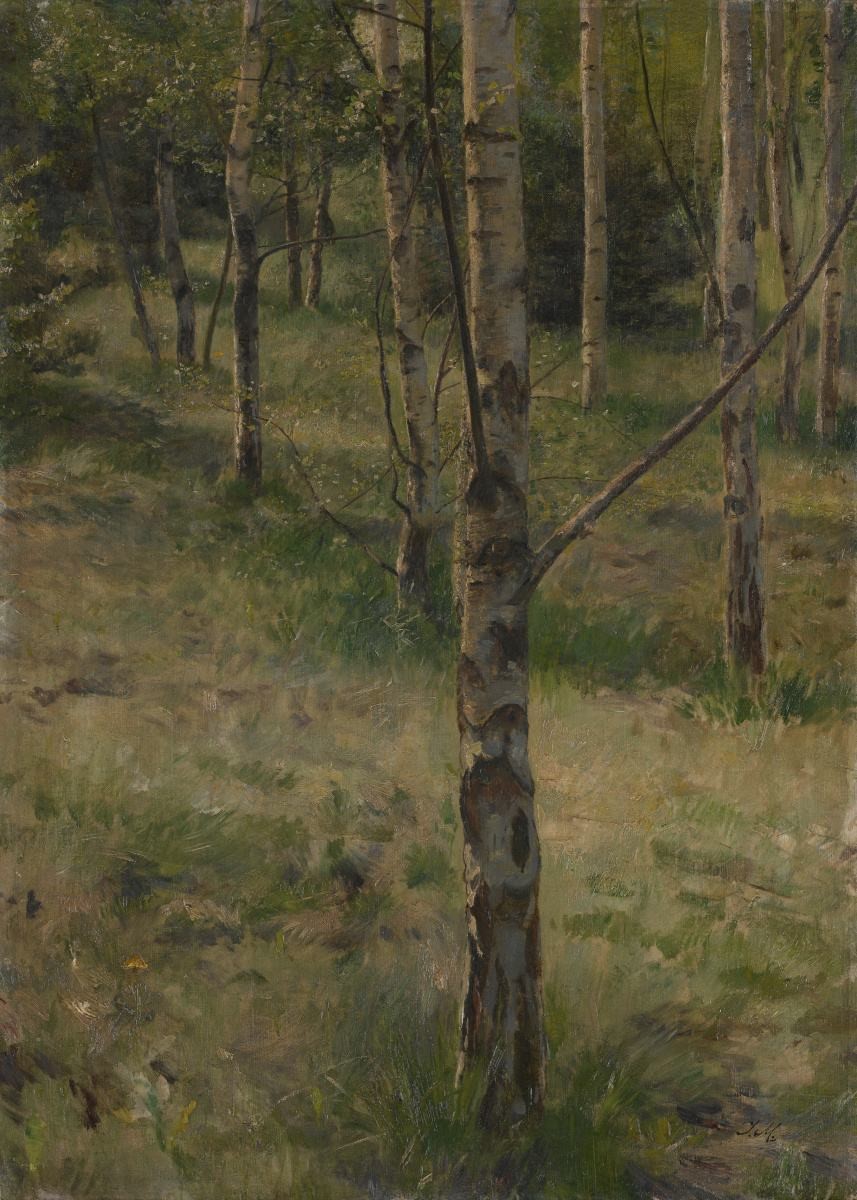