Liehm was a landscape painter. From 1836 to 1847, Liehm studied at the Prague Academy, first under Antonín Mánes – he was one of his best students – and from 1844, under his successor Max Haushofer, who significantly improved the state of landscape painting in the Czech lands. In 1852, Liehm moved to Teplice where he taught painting.

This painting can probably be considered identical to a picture exhibited by the artist under the name Landscape around Duchcov at Harvest at the exhibition of the Society of Friends of Fine Arts in 1849. The painting depicts a picturesque landscape near or around Duchcov, which was an inspiration to Liehm till the end of his days. Around 1849, Liehm painted mostly in his home region, in the vicinity near Duchcov. Apart from Duchcov, he depicted the landscapes around Kostomlary pod Milešovkou (1847), Dubí (1847), Dvoujhradí u Dubí (1848), Oldřichov u Duchcova (1849), Hrob or Teplice (1850), where he finally settled in 1852 and started to paint the scenery around Duchcov.

In the first half of the 19th century, Duchcov was surrounded by farmland encircled by the mountain ranges of Krušné Hory and České středohoří. Around the town, there were mostly fields and pasturelands with groves, bosques and bodies of water. The main water source was a stream called Mlýnský potok, later called Klášterský, surrounded by a great number of ponds, for example the Barbora pond, in a suburb which Liehm depicted and exhibited at the exhibition of the Society of Friends of the Fine Arts in 1850. Various roads and paths headed towards the town and the painting most likely depicts one of them. On the road, there is a man with a dog greeting a group of people reaping corn on the other side of the road. Citizens of Duchcov were mainly farmers growing legumes, potatoes, garlic, mangel-wurzel, etc. The depicted vegetation along the stream and the grove in the back represent the remnant of the natural oak-hornbeam forests in this area. Apart from the full-grown oaks and white willows, we can also see common ashes, typical for willow bushes located near earthy and sandy alluviums. We can also identify the blooming hedge bindweed and common ivy, twirling around the highest oak. With simple tools and rather austere colours, the painter was able to capture the atmosphere of a hot summer day. With this and similar paintings, Liehm cleared the way for realistic landscape painting, further developed by Adolf Kosárek. 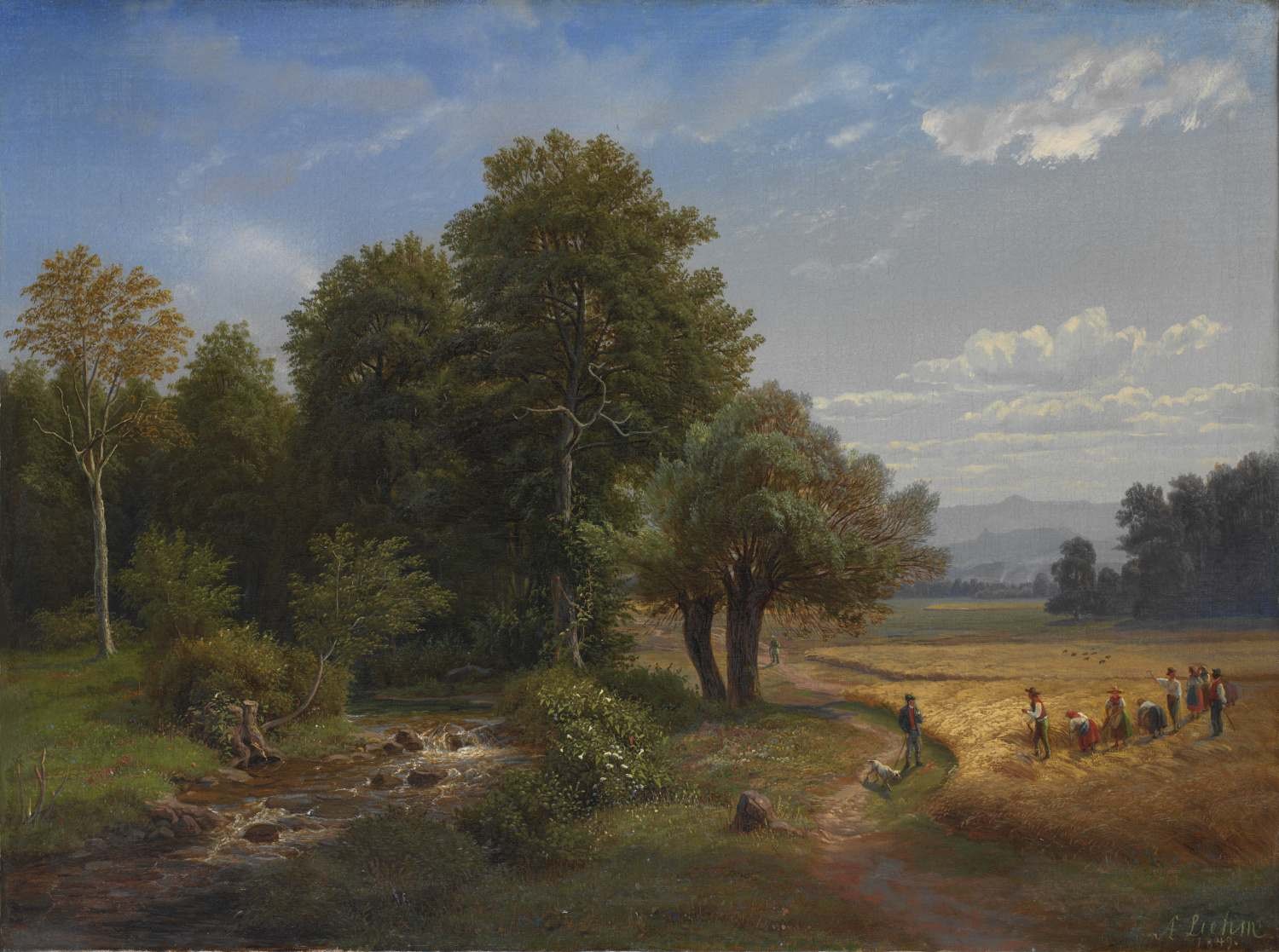