Köpf studied at the Vienna Academy of Fine Arts under Josef Matyas Trenkwald, Kasimir Pochwalski and Siegmund L’Allemand. He travelled around Austria, France and Holland. He regularly presented his works at exhibitions in Vienna. He received a state medal, the Prize of the City of Vienna and the Golden Laurel Wreath of the Viennese House of Artists – he was a member from 1903. He probably also exhibited abroad, for example, in Berlin in 1909. He is known as a painter of architecture, town scenes and landscapes. He also painted still lifes, the interior of his house and studio with several versions of the same items, religious scenes and nudes.

Due to the popularity of naturalism, which appeared in the 1880s, genre painting also became more popular. In the 1890s, Köpf started to create paintings with these motifs. Scenes from everyday life were very common. Young artists were interested in social motifs from urban, as well as country, life.

This naturalistic, airy painting of a socially-aware scene depicts a simply dressed old woman. The painting has been known and published as An Old Woman’s Prayer. However, if we look carefully at all the details, it might raise doubts about the suitability of the title. Is the old woman really holding a picture of a saint and praying to God? Could it be a photograph or a memory of someone dear? This scene with the old woman surrounded by items which bring back memories of the long gone past, resembles scenes from the popular Czech book The Grandmother by Božena Němcová. However, the idyllic atmosphere of the novel does not match the atmosphere of the painting. The fictitious granny also used to show her grandchildren items from her past.

The old woman in Köpf’s painting might be thinking about someone dear from her past, her eyes full of tears. As an experienced painter of still lifes and interiors, Köpf artfully arranged various items around the old woman and some of them brought back old memories. Maybe it is the old letter with a dried rose lying on the floor, the old jacket made of lustrous taffeta thrown over the pull-out drawer or even the old trunk on which she is sitting. Köpf also used his skills on the everyday items on the chest, all of which are almost photographically accurate. 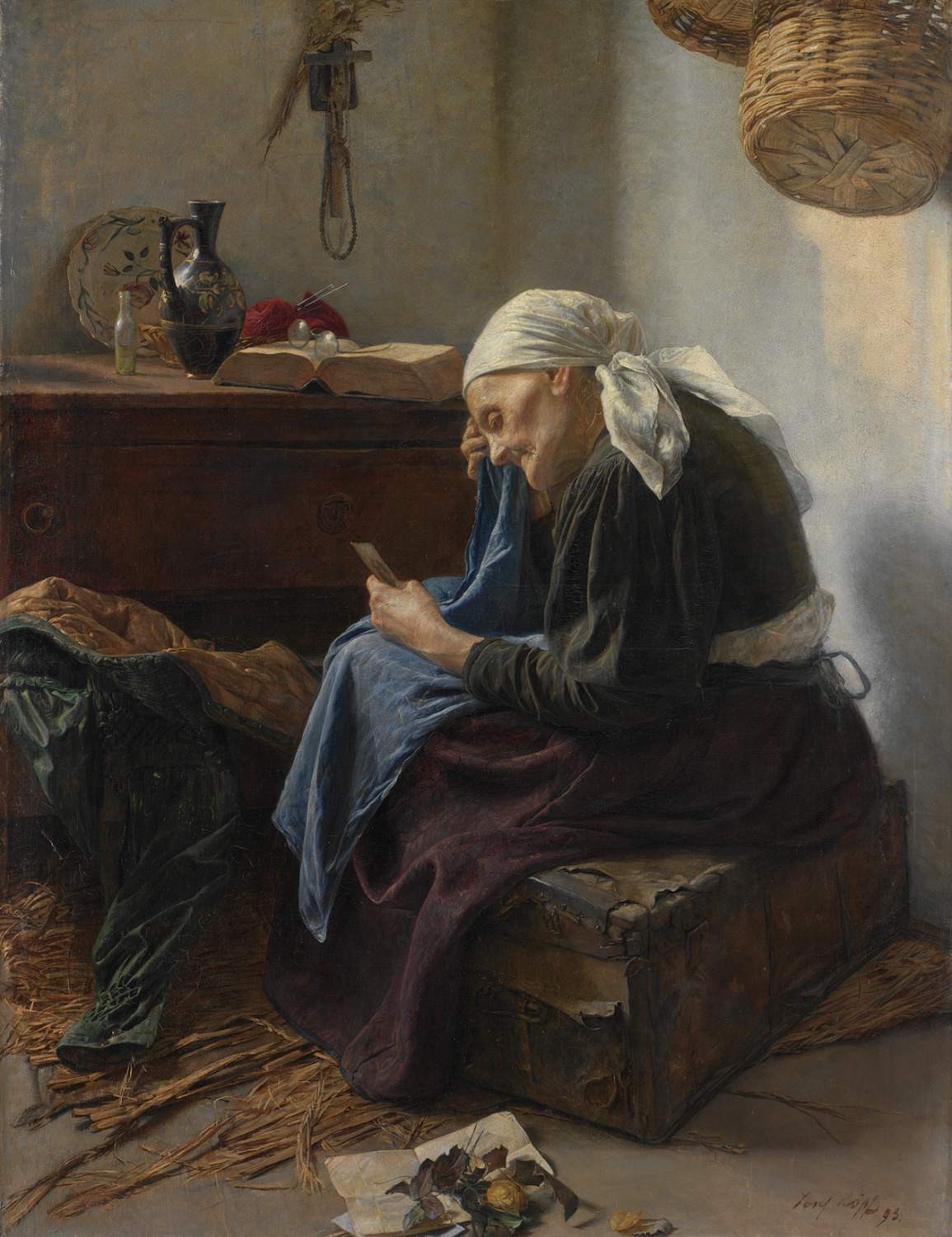