Karel Škréta was the founder and most eminent personality of Czech Baroque painting in the 17th century. He received his training in the circle of the workshop of Aegidius Sadeler and apparently of Johann Georg Hering as well, becoming acquainted with art at the Court of Emperor Rudolf II in Prague. He left for Germany (Stuttgart) for religious reasons in 1628 and finally for Italy, where he dwelt in Venice, Bologna, Florence and Rome. In Italy he converted to Catholicism and in 1638 returned to Prague. His next career is linked with that city but his work is influenced by Italy, initially by Venetian colourism and Caravaggios chiaroscuro, in the sixties he inclined to Bologna Classicism, and in the concluding phase of his work he created a dis¬tinctive synthesis with an emphasis on the meditative and psychological component of his religious pictures. With his example he substantially influenced the next development of Baroque painting in Bohemia and Moravia.

Provenance: painted in 1641 as a commission from the Prague burgher Doctor Isaiah Harm for the convent of Barefoot Augustinians in Zderaz, where it was originally one part of a large cycle on the life of St Wenceslas, 32 paintings in all, The texts placed on the stairs in the lower part of the picture are extracts from The Life of St Wenceslas, written by a prior of the convent, P. Aegidius, who must have been the author of the entire conception of the cycle. When the convent was abolished during the Josephinian reforms (1785), the painting passed to private ownership and in the 19th century found its way into the Liechtenstein picture gallery in Vienna. In 1881 it was transferred to the chateau in Valtice and in 1958 was acquired by the Olomouc Museum of Art by transfer from the Czechoslovak State Forests Corporation.

The Olomouc painting must be one of the best-known works by Škréta and has always enjoyed considerable attention. This large-size canvas is his seventh picture from the great St Wenceslas cycle, commissioned by members of the Augustinian monastery in Zderaz and painted by Škréta from two thirds. In this grand com-mission "Škréta painted the first monumental epic pictures produced in the mature Baroque style in the Italian sense. The St Wenceslas cycle is at the beginning of Baroque painting in Bohemia" (Neumann 1974).

The Olomouc painting has an important place in the cycle, due both to its precise date being known, the high quality of the triangu¬lar composition and the painterly conception. These values and the bright colours demon¬strate the heavy influence of the Venetian school, in particular Titian and Veronese.

Škréta is distinguished by reminiscences of Italian impulses (from Venice amongst others) in the forties, that is the years immediately preceding his period of creative flourishing and maturity, which represented an entirely new tradition in Czech art. In addition to its painterly quality, the picture is remarkable for the range of epic narrative interest in one of the key episodes from the life of the saint. 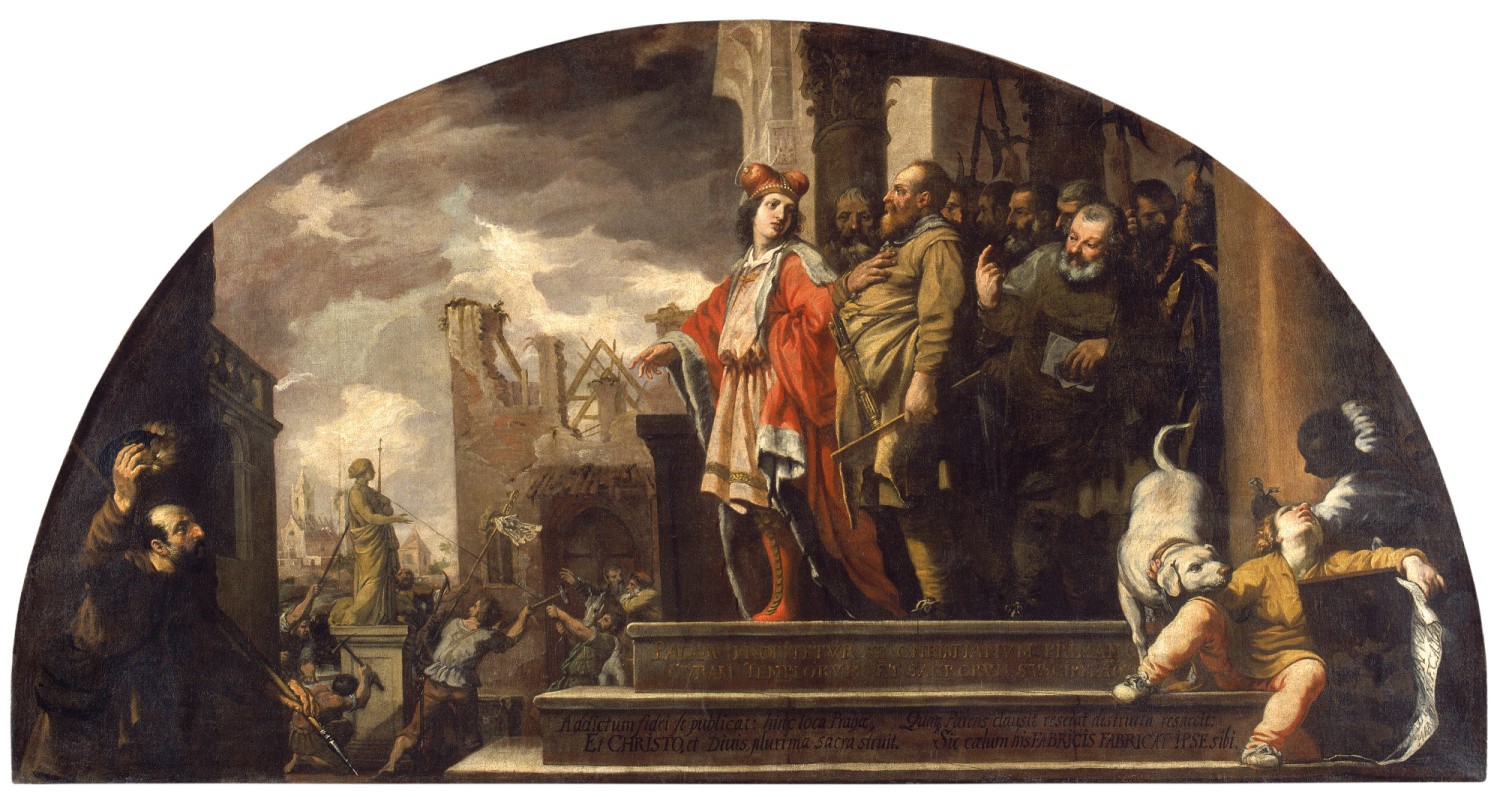