Mánes was first taught painting by his father Antonín Mánes. From 1835 to 1844, he studied at the Academy in Prague, at first under his uncle Václav Mánes and then under František Tkadlík (1786–1840) and Christian Ruben (1805–1875). From 1844 to 1846, he lived in Munich. He was a member of the Union of Creative Artists (1848-1856) and, in 1863, he participated in the foundation of the artists’ association Umělecká beseda, where he was the chairman of the fine arts division (1865–1866). From 1843 he spent a lot of time at the château in Čechy pod Kosířem with the family of Count Silva-Tarouca. He was a portrait painter; his portraits were very popular and desired. He also created folk costume studies, monumental paintings, romantic landscapes and small genre paintings from town settings or the life of aristocratic society in the style of the Rococo Revival. He made illustrations for folk songs and fiction. He was an exceptionally and universally talented draughtsman and painter who is considered to be one of the most important artists of Czech art of the nineteenth century. Artists working on the decoration of the National Theatre continued in his legacy of reviving Slavic ideas.

This portrait of an unknown family, probably a commission, was painted when he was at the peak of his creative life. His portraits from this time show the characteristic spatial awareness, three-dimensional modelling, vivid and refined atmosphere, soft tone of colours, and apt depiction of personalities of the portrayed people. He put a special emphasis on the depiction of their faces. The smooth style and transparent rendering of skin tones resembles works by Franz Xaver Winterhalter (1805–1873), whose style Mánes could have studied at his exhibition in Vienna in 1856. However, all of this is not true about the painting from Olomouc. Even though it is a quality piece of work, it is not one of the painter’s best.

The painting of a married couple and their two children is rich in atmosphere and gives us the opportunity to look at the intimate setting of their home. We see a cosy salon with a large canvas with a mountain landscape. This corresponds with the period interest in family and close friends. “Strengthening family and friendly relations ensured the social and emotional environment”, which was especially important for the upper classes. The effort to impress is emphasized by the woman’s gold jewellery and the man’s gold necklace with a decorative buckle threaded through his buttonhole, which was the way men carried their pocket watch at that time. The girl has a gold medallion around her neck and a bracelet from red coral, which was a popular children’s amulet. From the times of Pliny the Elder, it served as a protection against bewitchment and as an indicator of fever. 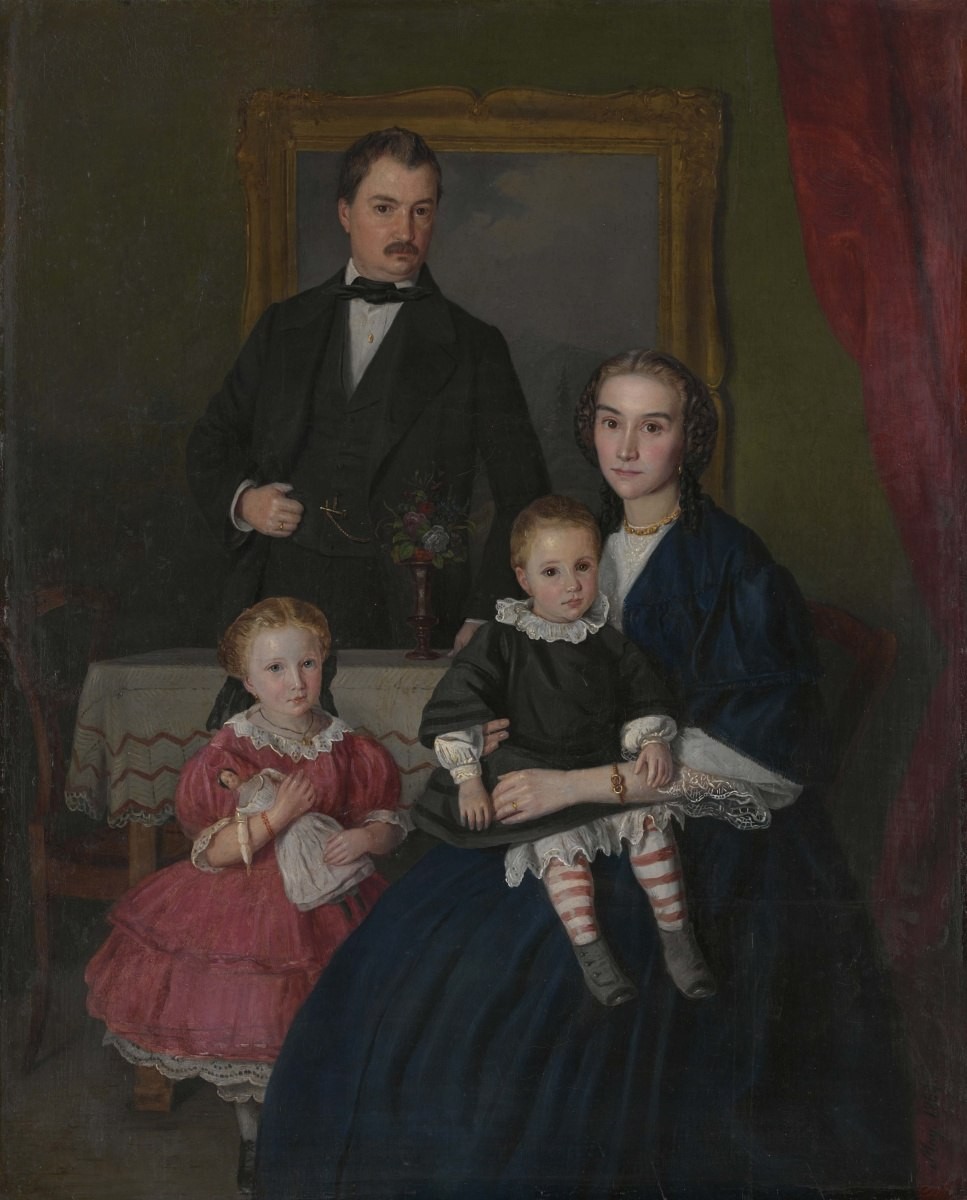