In the Convent Garden (Singing Children with a Nun), 1905

Hölzel was a painter and theoretician. He was one of the first artists who created abstract paintings. His father was an Olomouc publisher, lithograph and dealer in books about art and music. Due to his talent, he was trained in drawing, while he was studying to become a publisher because it was assumed that he would take over his father’s business. In 1872 his father moved his lithographic workshop to Vienna and Hölzel became a part-time and later full-time student of the Academy. However, he interrupted his studies and joined the army and wanted to become an officer, but in the process he changed his mind and returned to his artistic career. From 1876–1882 he studied in Munich. In 1887 he went to Paris where he was inspired by Manet and Monet. After that he left the Munich Academy and it historicism and joined the founders of the Munich Art Nouveau movement. In 1888 he moved to Dachau and opened up a private art school. In 1893 he joined an art group called “Neue Dachau” led by Fritz von Uhde who promoted a simplified form of original painting. In 1906 he was named a professor at the Academy in Stuttgart where he stayed till 1918 and helped to raise the school to world fame. His successor was Paul Klee. Hölzel experimented with two dimensional spirals and circles, evoking spiritual waves which were later applied to architecture, especially in sacral architecture. His students were Emil Nolde, Max Ackermann, Willi Baumeister and the later members of Bauhaus – Johannes Itten and Oskar Schlemmer.

In the era of decadence, monastic gardens were popular motifs for their combination of idyllic and yet provocative intimate look at the life of monks and nuns.  In his feigned scene, Hölzel stopped at the fence around the convent school because he was captivated by the girls’ prayer before their classes. He unsettled the oldest girl who sees him as a voyeur. The nun is also watching him with a suspicious look, raising her hand in warning because she is responsible for her pupils who cannot properly focus on their prayers. Her strained eyes are at the same level as the girl’s. Some girls view the intruder only as a momentary distraction during their prayer, while others are fascinated by him. The little girl in the background is staring at him.  Hölzel closely perceives the convent community. He precisely distinguished the age of the girls – the smallest barefoot girl who cannot read is holding a flower, instead of a prayer book or a hymnal.

It is basically a story about stern female education. That explains the distance and withdrawal of the figures set amidst the countryside convent school. A carelessly dropped school bag supports the authenticity of an ordinary school day. Hölzel had an understanding for girls’ education. At the time of this painting, he became a professor at the Academy in Stuttgart and helped to establish painting classes for women called Damenmalklasse.

In this painting Hölzel returned to the mundaneness he used to depict at the end of the 19th century, for example, in his painting A Girl with a Wheelbarrow from 1895 (Dachauser Galerien und Museen). The style of the painting resembles Impressionism, with the morning sun outlining the figures. The motif is also based on older paintings. We can mention a painting from 1890 called The Catechism Lesson by French painter Jules-Alexis Muenier.1 This painting also depicts a convent school but with a reversed composition – a monk with an older boy and other wards (Musée des Beaux-Arts et d’archéologie v Besançonu). This painting, exhibited at the Salon in Paris in 1891, was very successful and bought by the French government.

While Muenier was influenced by Breton’s en plein air painting, Hölzel’s painting from the beginning of the 20th century was created in the time of style layering, which is associated with style “contamination”. We can see traces of Pointillism as well as Art Nouveau, but the painting is cohesive.

Hölzel created the painting after his return from Italy. The economical, sketch-like brushwork is a feature of his personal stylization. He resembles Swiss painter Ferdinand Hodler who was born in the same year. Hodler also started with a realistic foundation but transformed it into a certain kind of symbolism called parallelism. Unlike in his older works, Hölzel is not after the sensual perception of the motif, but he tries to capture the psychological tone of the scene. He is interested in the mood of the depicted figures. This marks the end of realistic painting in his career and later on he radically moved his attention to abstraction.2 In 1901 he published an essay About Form and Distribution of Mass in a Painting in which, inspired by the Theory of Colours by J. W. Goethe, he analysed the principle of music harmony via spirals and circles – four years before Wassily Kandinsky’s abstract painting Composition in Red (1905). Hölzel made an important mark in the history of abstract painting3 as suggested the Kunstverein exhibitions in Freiburg in 1916 and 1917–1918.

His works were presented in Stuttgart, together with the works by his pupils Johaness Itten, Oskar Schlemmer, Willi Baumeister, Giovanni Antonio Pellegrini and Ida Kerkovius, at an exhibition called Hölzel and his Circle. In her book published in honour of the 150th anniversary of Adolf Hölzel’s birth, Karin von Maur called him “an artist and thinker”.4 His importance was remembered at a number of exhibitions, especially in Switzerland in 2011.5

1. He studied under J.-L. Gérôme and was friends with painter Pascal Dagnan-Bouveret (just like Vojtěch Hynais). Another of his very popular paintings with an old teacher and a small girl at a piano, First Music Lesson, also appeared on a postcard.

3. On the other hand, Hölzel’s Olomouc painting was presented at an exhibition called Antimodernists presenting artists who opposed modern art. See Olič 2009. 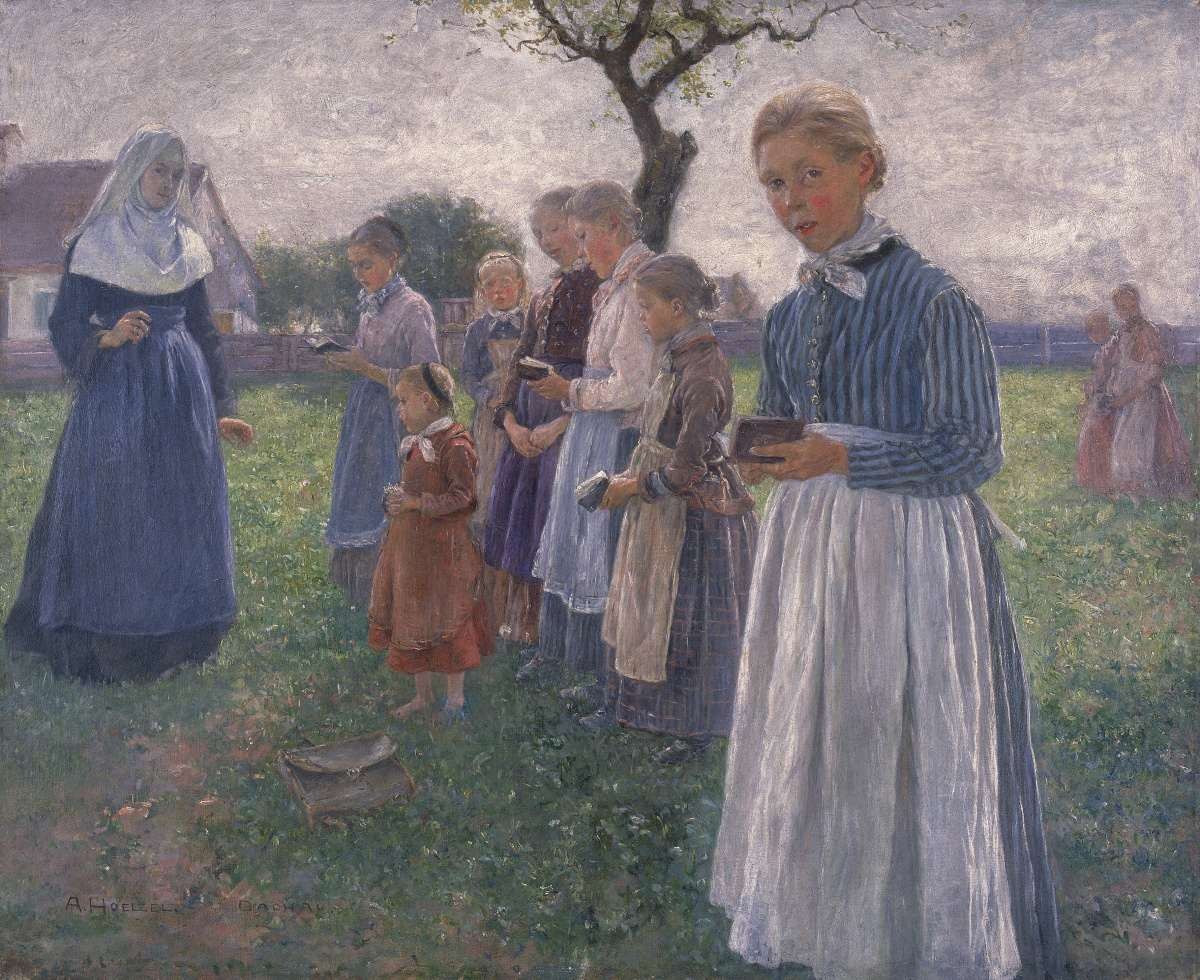 Adolf Hölzel
In the Convent Garden (Singing Children with a Nun), 1905
Related