Engelmüller´s mother came from the French officer family of Le Gros and his grandmother was a Polish aristocrat. From 1889 to 1894, he studied at Julius Mařák’s School of Landscape Painting at the Prague Academy, where he was admitted without an entrance examination. He was one of Mařák’s best students. In 1896 he co-founded the Mánes Union of Fine Arts and became its secretary. A year later he started his own painting school located on the Masaryk waterfront which he later moved to Hrzánský Palace in Loretánská Street. He taught his own methods which he later presented in his book Cesty k malířskému umění (A Journey to the Art of Painting, 1923). In 1898 he left the Mánes Union and later became a member of the Union of Creative Artists. From 1906–1908, he travelled across Europe to Germany (where he spent some time in the Dachau Artists’ Colony), Holland and Italy. He mostly pursued landscape painting. He painted and drew (using pastels) “dreamy landscapes, old parks, abandoned monastic and castle buildings overgrown with flora and picturesque recesses of Prague”. He significantly contributed to the introduction and improvement of pastel painting in Czech landscape painting.

Ferdinand Engelmüller focused on his big cycle “Czech landscape” from 1902; it was an attempt at the expression of “the soul of the Czech lands.” Some of his favourite landscapes were Polabí, the Bohemian-Moravian Highlands and the Bohemian Forest. He also liked to visit White Mountain, which he also depicted in this cycle. He belonged to the generation of Czech painters who looked for inspiration in nature and depicted it as a symbol for inner human reflections. He also tended to have a looser perception of nature; landscape helped him to express his own thoughts and feelings, even though he was not as successful in doing so as Antonín Slavíček, Alois Kalvoda, František Kaván, Otakar Lebeda, Stanislav Lolek and others.

Engelmüller was influenced by Mařák and Chittussi, but his approach is simpler, “the tone of his poetry is tearful…”. Many of his landscapes are done in melancholic colours, full of romantic longing and no undertone of bitterness or disappointment. The artist likes to come back to “the crumbling and abandoned glory of old gardens and gloomy monasteries where silence and eternal peace reign and the delirious happiness of the lonely blooms”. Especially the plains of White Mountain and flat lands of Polabí swirl in sadness. A strong feeling of melancholy and loneliness is also evoked by the Olomouc painting called Early Evening or Landscape with Rotunda in the inventory. It is one of artist’s depictions of White Mountain with dramatic skies and the summer residence Hvězda, which almost seems to lose its monumentality on the horizon. This painting stands out because of its simplest and most impressive portrayal of this place. As in other paintings done of this place, it is a northwest view from the location of the Battle of White Mountain in 1620. The original title of Engelmüller’s later portrayal of White Mountain, most likely from 1917 and now in the National Gallery in Prague – Alone. White Mountain – implies the existential content of the painting, the feeling of loneliness, implied by a mournful evening landscape and explicitly expressed by two solitary figures: a mother sitting on a balk and hugging her son, who pensively stares into the distance. Engelmüller exhibited his painting titled White Mountain at an exhibition in the Rudolfinum in 1904 (p. 6, cat. no. 51). However, due to the missing additional technical description, we cannot identify it with paintings from Olomouc or Hradec Králové (its vertical composition includes a statue of the Crucifixion of Christ), even though both of them were probably created around 1904. 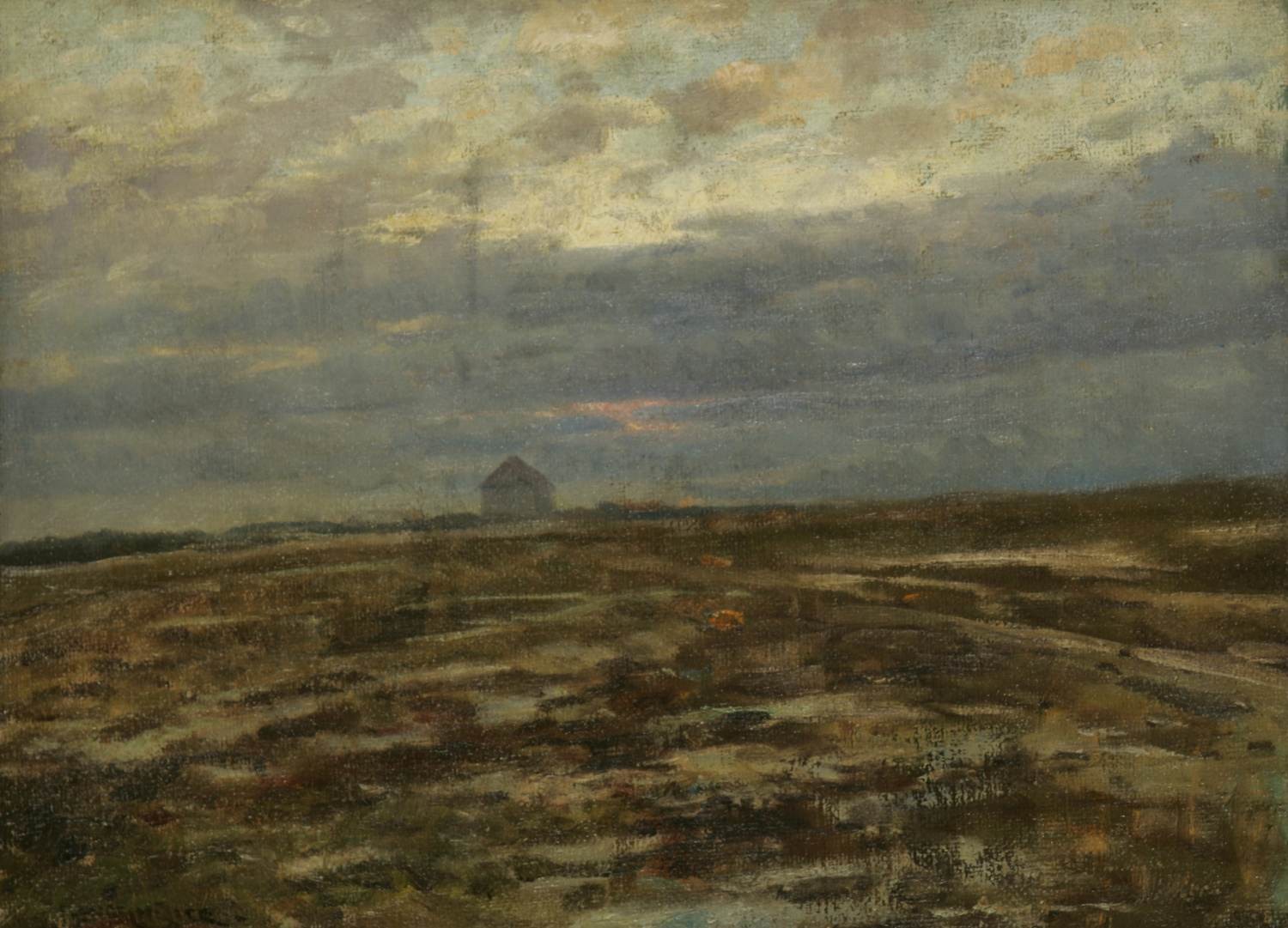