Boats on a Lake, [3rd quarter of the 19th century]

Chwala started to study at the Prague Academy in 1851 when he was only 15 years old. At first he attended preparatory courses and later, in 1854–1859, the landscape painting studio of Maximilian Haushofer. He presented his works at the annual exhibition of the Society of Patriotic Friends of Art in Prague in 1856. In 1864 he moved to Vienna where he gave private lessons. He regularly exhibited in Vienna and Prague. His romantic landscape paintings gradually became more realistic. The majority of his works were named after the depicted place which suggests that Chwala constantly travelled around Bohemia, Moravia, Austria and Germany. Chwala’s works have been underrated for a long time, but now he is being re-evaluated and placed among the more prominent disciples of the Haushofer Landscape Painting School.1

Apart from mountain landscapes, Adolf Chwala also depicted flat lands with rivers or ponds, forest nooks and lakes (often in mountains). He captured them in various times during the day as well as at night. The painting from the Olomouc collection belongs among the set of night time landscapes which depict “a silently flowing river or Alpine lakes in moonlight.”2 Chwala usually created them near the village of Pöchlan on the Danube or near the lakes Mondsee, Trauensee, Attersee (near Salzburg), Wörthersee (near Klagenfurt) or Genfersee (in Switzerland). He painted shores with fishing boats – sometimes even sailboats – with the silhouettes of fishing villages or other more famous buildings – for example, the small chateau near Lake Wörthersee or Chateau Chillon near Genfersee – in the background. The paintings are set at night, with the moon showing through the clouds and reflecting on the calm water surface.

The Olomouc painting shows a similar landscape, depicted not at night but at dusk or dawn. In the forefront there are two fishing boats anchored on the shore of a lake or a river. In the background we can see a peninsula with trees and the silhouette of a church and other buildings. The horizon shows a flat landscape with light red clouds in a nearly clear sky.

The painting was acquired in 1944, during WWII, when museums often obtained paintings from Jewish families. By coincidence, we know that Chwala’s painting called Abendstimmung (Evening Atmospehere) was a part of Viktor Hamburger’s (1859–1938) collection in 1900. Hamburger was the owner of a malthouse in Wolker street in Olomouc. The painting was exhibited at the opening exhibition of the Society of Friends of Arts in Olomouc in May 1900. Unfortunately, the catalogue lacks detailed identification data about the painting so it is not possible to tell whether these two paintings are the same. 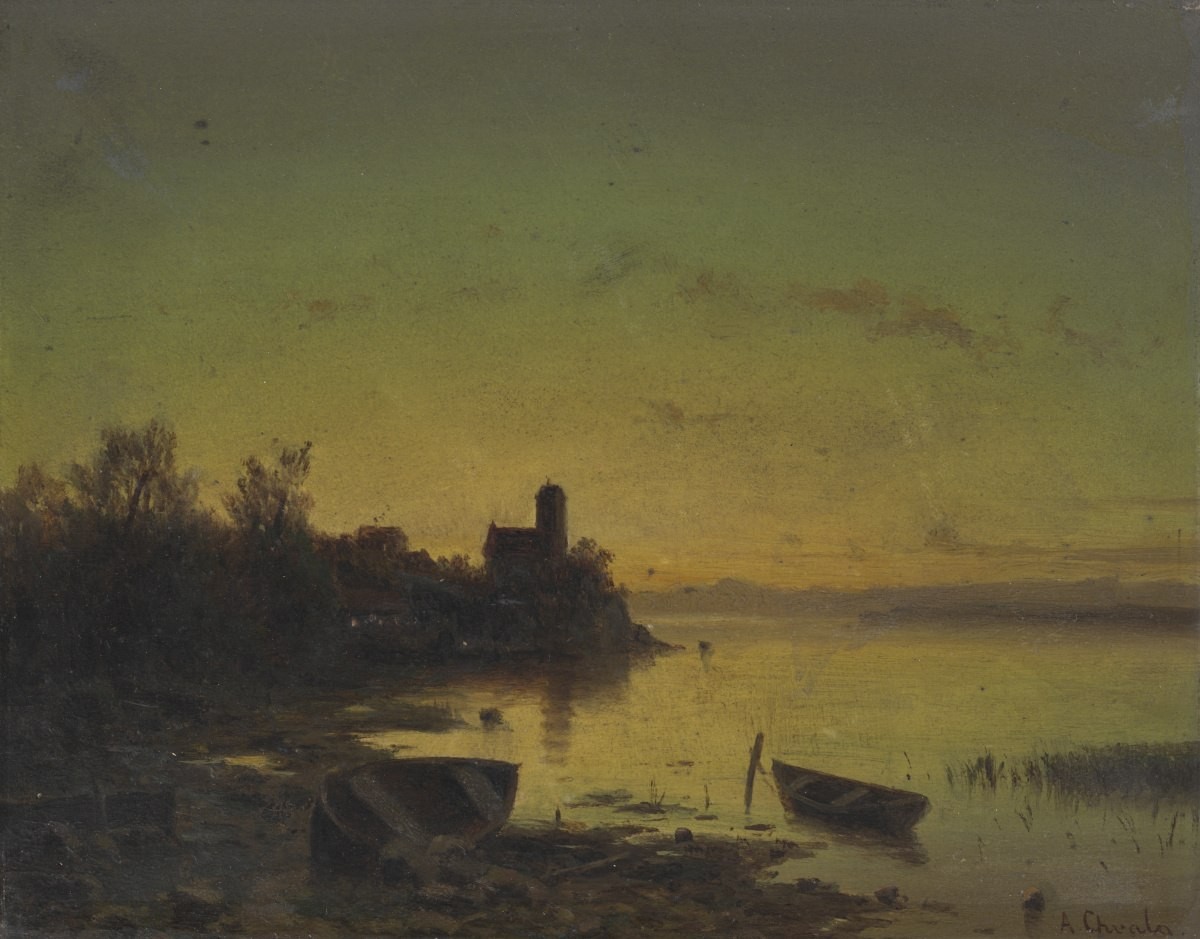 Adolf Chwala
Boats on a Lake, [3rd quarter of the 19th century]
Related