Čapek was a painter, draughtsman, printmaker, cartoonist, illustrator, scenographer, writer, playwright, art critic and journalist. Together, with his brother Karel, he was a leading figure of the Czech cultural movement between the world wars. Because of the wishes of his parents, he attended weaving school in Vrchlabí (1901–1903) so he could later take over the family textile company. Only through his brother-in-law’s intercession was he allowed to apply to study at the School of Applied Arts in Prague. His talent was tested during his summer stay in Kalvoda’s landscape painting school in Hranice (1904). He graduated from the School of Applied Arts under Emanuel Dítě, Vítězslav K. Mašek and Jan Preisler (1904-1909). After that he travelled with his brother Karel to Paris, where he worked in the Colarossi studio. In Paris he also got acquainted with Cubism and ethnic art. After his return home, he became an active member of the avant-garde movement. At first he was a member of the Union of Fine Arts (1911–1912) where he promoted a less dogmatic version of Cubism. Because of the unsustainability of his stand on art, he left the union and joined Mánes Union of Fine Arts (1912-1914), but he was not satisfied with this group either. In 1917 he founded a group called Tvrdošíjní, of which he was a member until its end, in 1924. Even though he divided his creative potential between literature and fine arts, he left an extensive collection of paintings and drawings. He was also an important scenographer between the world wars. He played a critical role in Czech book art as an illustrator and an editor of the books by publishers such as Aventin, Dobré dílo, Obzinovy tisky and others. He used an avant-garde approach when working with books. He died prematurely, at the very end of the war, in Bergen-Belsen.

The painting Birches - this extraordinary, and for long time unknown, piece of art - is most likely the oldest known painting by Josef Čapek. It was probably painted by seventeen year old Čapek during his stay in Kalvoda’s landscape painting school in Hranice in 1904. The painting is done in two parts. The main one is divided by a horizontal line, which creates the skyline with a row of cottages. In the foreground there are six birches with heavily leafed crowns which, despite their height, allow the viewer to observe the landscape behind them.

The painting was done with short brush strokes in shades of green and blue, unified with Art Nouveau silver tones. The whole work is done in Art Nouveau style and was influenced by Kalvoda’s landscape painting school with all its traits, whether it is the choice of the subject, emphasis on line drawing or the arrangement of the composition. Čapek worked in Art Nouveau style in the early years of his studies, as we can see in other preserved drawings. His style and colours began to loosen quite early, which corresponds with his temperament and awareness of the contemporary movements of Fauvism and Expressionism.1 That is why this painting is unique in Čapek’s works. During the preparation of Čapek’s monograph by Jaroslav Slavík, the painting was just acquired, but it was presented to the public at the big retrospection of his work at the exhibition hall of the Prague Castle Riding School. The importance of this painting is also confirmed by its presentation during the exhibition Na duši pokoj (Soul at Peace) in the Gallery of Fine Arts in Hradec Králové in 2012. 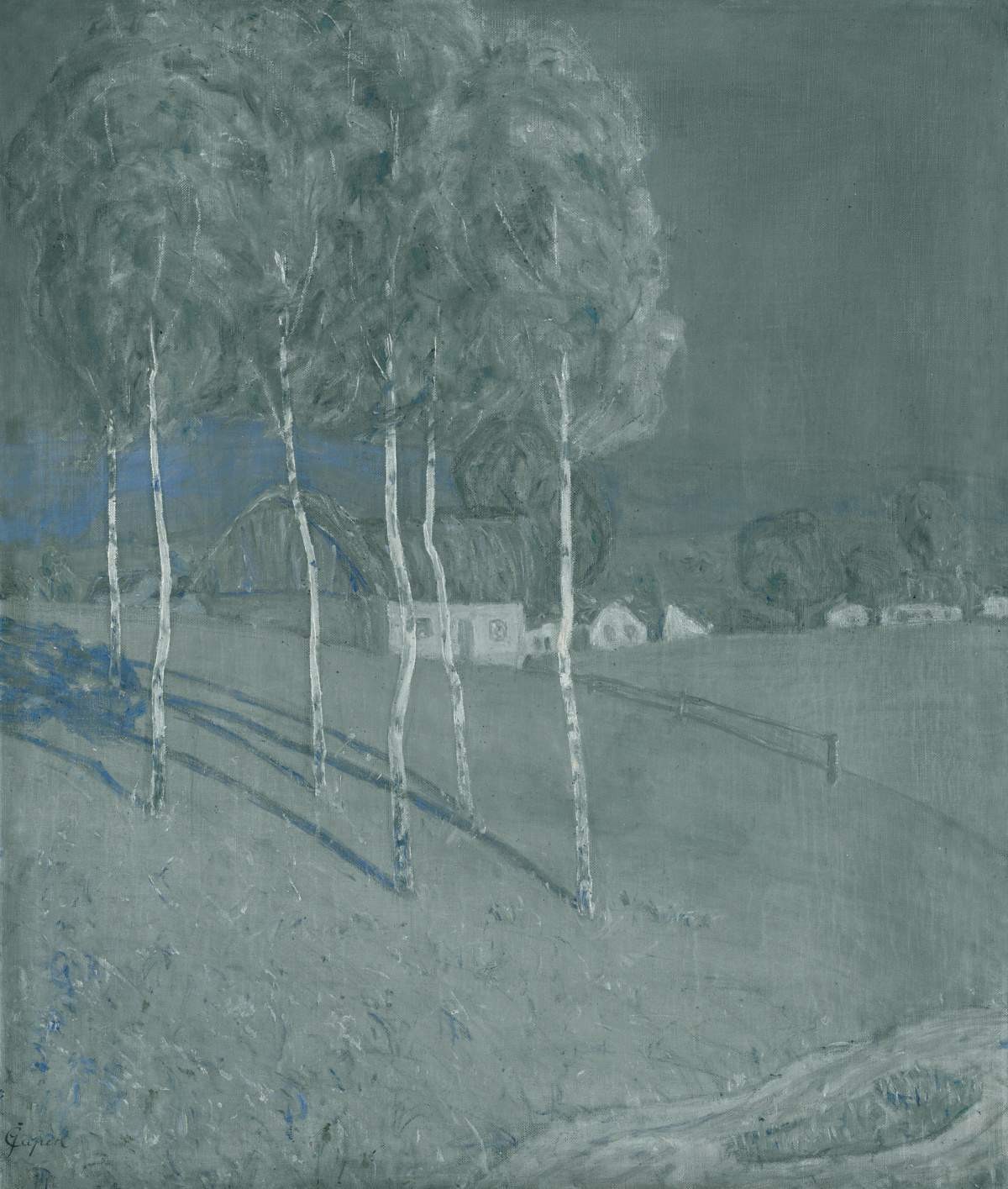