The most talented successor of Pieter Pauwel Rubens was born at the end of the 16th century in Antwerp. Even before he turned twelve, he had his own workshop of painters and co-operated with Rubens on prestigious commissions. Between 1621 and 1627 he lived in Italy, gradually visiting all the major cultural centres - Genoa, Rome, Venice, Florence and Palermo, where he worked on a commission for Sicilian Viceroy Emanuel Filibert of Savoy. From van Dycks Italian period, a sketchbook of 200 pages is preserved in the British Museum. The painter recorded the details of paintings, compositions and colour schemes and prepared his future projects. He was truly fascinated by Tizians work. After his return to Antwerp, he became court painter for Archduchess Isabella of Spain, the governor of the Spanish Netherlands. The peak of artistic and social achievement for young Anthonis was an invitation to the English court of Charles I in London. During his stay there van Dycks portrait painting skill matured into what became an unattainable model, both for his contemporaries and his successors throughout Europe. Apart from his painting skills, the English aristocracy appreciated the artists good looks and elocution. In England he was received by the king more than warmly, and he was accommodated and entertained at the kings expense. In 1632 he was knighted and awarded the title of "Principall Paynter". The Kroměříž portrait of Charles I and his wife Henrietta Mary, daughter of King Henry IV of France, is one of van Dycks first English commissions and also one of the best examples of the portrait art in general. A portrait of the king and queen was commissioned to another Dutch painter, Daniel Mytens, at the beginning of 1632. When Mytens’ work was completed, the picture was briefly hung in the Drawing Room at Somerset House. Briefly, because the king found it lacking in quality compared to portraits by Anthonis van Dyck. The canvas was returned to Mytens for reworking and Anthonis was asked to paint a new portrait of the royal couple. He based the composition on Mytens painting, adding space, animation and elegance missing in the original. Rather than being an official portrait, it was a private work, designated for the private chambers of the queens residence. Henrietta Mary, as the daughter of famous king-commander Henry IV, gives Charles a laurel wreath. Charles, as the son of the king-peacemaker James I, passes her an olive branch. The wreath of evergreen leaves, however, may be seen as a myrtle wreath, the symbol of Venus and of marital fidelity. The looks and gestures of the figures also allude to similar conclusions. The joyful tidings of marital love, as well as the reconciliation of the two kingdoms, are announced to the world through undrawn curtains. However, Fortuna was preparing a less joyful future for the couple. Henrietta left England in 1644 because of the civil war and Charles, after a series of military defeats, was arrested, accused, condemned and beheaded on 30th January, 1649. The royal estate was auctioned shortly after the execution and the breathtaking royal collection scattered all over Europe. Franz and Bernhard Imstenraedt, art dealers from Cologne, acquired part of the collection and in 1673 they sold it to the Olomouc bishop Karl von Liechtenstein-Kastelkorn. 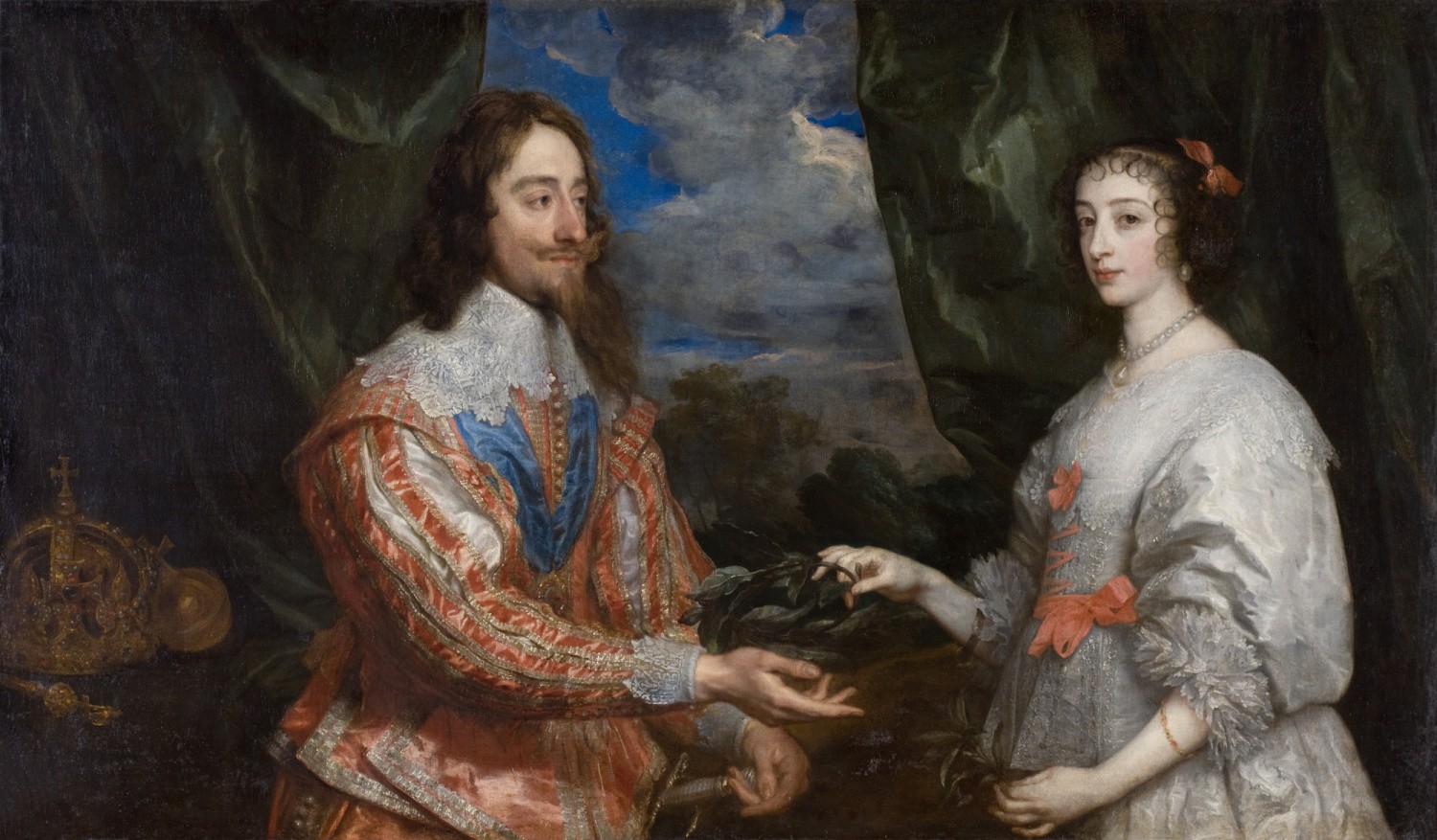 King Charles I of England and His Wife Henrietta Mary, between 1632 - 1634
Related