The cycle of sixteen large-format etchings of Carceri (Gaols) is without doubt one of the most famous and, in meaning, one of  the most speculative works of Italian architect, graphic artist and theorist of architecture, Giovanni Battista Piranesi. The heavily disturbing atmosphere of a dramatic, imaginary gaol resembling vast labyrinths with massive pillars, arches, bridges, diagonal and spiral staircases, long galleries and barred windows has, since the age of Romanticism, rendered a number of interpretations and speculations about their hidden meanings and the motivation which led to their creation. During Piranesi’s life, the album was published in two different editions, each being issued repeatedly. Piranesi probably worked on the first sheets of the album as early as the second half of the 1740s. For the first time they were published together under the title Invenzioni Capric. di Carceri (Invented Images of Gaols) by Giovanni Bouchard, between 1749–1750. Almost a decade later, Piranesi re-worked the original copper matrices in a radical way, adding two new sheets to the original fourteen (including the cover sheet). The abstract images of a gaol were changed in the second re-worked edition into imaginary gaols of ancient Rome. The original matrices were re-worked, not only by adding numerous details, but also by repeated deep etching of the shadowy parts, adding drama to the scenes. The second edition of the album under the revised title of Carceri d´ Invenzione (Imaginary Gaols) was published in 1761 by Piranesi’s own publishing house. In the Kroměříž collections, the second edition of the album is preserved in the archiepiscopal library, bound as part of one of the two volumes of Piranesis graphic works. The etching called A Gothic Arch, number fourteen in the second edition, captures the attention through the contrast of light and shadow rhythmized in a monumental vaulted space with tall pillars and arcades to such a degree that an almost abstract effect obscuring the logic of the constructions depicted is achieved. The composition of this very successful graphic sheet was later expanded by Piranesi in two drawings dated the second half of the 1750s, the first is currently in the collection of the National Gallery of Scotland, the second is in Kunsthalle, Hamburg. 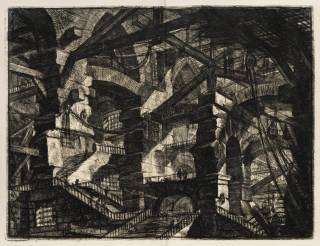