The Olomouc Archdiocesan Museum will be held for the fifth time Art Brut Film - festival of films focusing on the phenomenon of art brut or outsider art. The organizers from the association ABCD will project movies about the museum in the Austrian vbillage Gugging and about artists associated with him. By Thursday, March 31 from 5 PM viewers will see four films.

Last year, the organizers of Art Brut Film Olomouc focused on authors of art brut from one country, Poland, this year focuses on the performance of important institution - the famous Art Brut Centre, which is part of a large complex of psychiatric hospital in the Austrian village Maria Gugging.

Renovated building with a respectable exhibition space 1300 meters square is the result of a unique experiment that was initiated by Austrian psychiatrist Leo Navratil (1921-2006). "He could turn attention to the creativity and imagination of patients, not only as a diagnostic method or a suitable therapeutic tool, but also as a distinctive artistic expression to artistically gifted and original individuals," said organizer of Art Brut Film Olomouc and collector Pavel Konečný.

The beginnings of the story of Austrian Museum fall until 1950, when he returned from Navratil study stay in London. He let his patients deliberately create drawings for experimental purposes. "And in the following year he appeared among them proved artistically gifted individuals," said Konecny. The first public presentation was in 1970 in Vienna. "This exhibition was followed by a long series of joint and solo shows of his wards throughout the world," he said. The number shows the number exceeds 200 today.

Decades of hard work culminated in the June 2006 opening of the new Museum Art Brut Center Gugging, which was rebuilt from the original building of the psychiatric clinic. "In addition to the museum itself, the exhibition space in the museum library, archive, depository, a multimedia room and a multipurpose hall for symposiums, concerts and other cultural events," added Konečný.

Festival Art Brut Film Olomouc introduced on March 31 rich activities in the Art Brut Centre Gugging through four documentaries. Festival will be held in cooperation with the Austrian Museum and the presence of his director Johann Feilachera, who will launch the whole event. 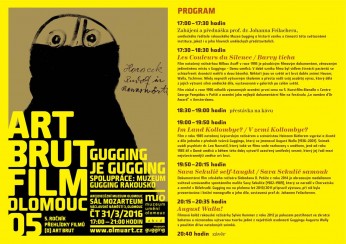