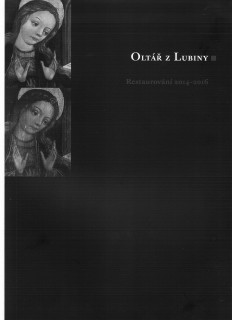 In 2014, four double-sided late Gothic panels with Marian themes were discovered in the parish church in Kopřivnice. From the 19th century onward, they were part of the side altar located in the Church of St. Wenceslas in Větřkovice (present day Church of St. Wenceslas in Lubina), but we do not know anything about their previous history. The altar wings had been damaged by fire and bore signs of several overpain¬tings, which is why they were restored in 2014–2016. They have been part of the permanent exposition of the Olomouc Archdiocesan Museum since June 2016. One side of the wings depicts the Joys of the Virgin Mary and the other side depicts the Sorrows of the Virgin Mary. The Festive (inner) side features the Annunciation of the Virgin Mary, the Visitation of the Virgin Mary, the Birth of Christ and the Adoration of the Magi, while the Everyday (outer) side shows the following scenes: the Flight into Egypt, O ur Lady of Sorrows, the Twelve-year-old Jesus in a Temple and the Virgin Mary Weaves Christ’s Shroud. The com¬position of individual paintings is visibly influenced by the prints by Master E. S., Martin Schongauer and Albrecht Dürer, but it is apparent that the altar was made in Silesia. The paintings of the Festive and Everyday sides were authored by two painters who per¬haps worked in Jakob Beinhart’s workshop in present day Wrocław. The painter of the Festive side of the altar, which at first sight has a more traditional outlook, was evidently trained in the Wrocław workshop of the painter known as Master of 1486–1487. The claim that the altar came from Beinhart’s workshop is further supported especially by the close relationship between the painting of the Virgin Mary Weaves Christ’s Shroud and Beinhart’s relief entitled Luke the Evangelist Paints the Madonna, which was originally designated for the St. Luke altar for the painters’ guild chapel in the Church of Mary Magdalene in Wrocław from 1506. On the basis of this fact, we can suggest that the altar of Lubina originates from around 1506.

A late Gothic predella relief, which was also pre¬served in the church and was used on the same neo¬-gothic altar as the late Gothic painted wings in the 19th century, was probably also part of the altar of Lubina. It showed the Throne of Grace; God the Father sitting on a throne, presenting the body of his Son to the fai¬thful for adoration. The relief was stolen in 1993 and all that remains of it to this day is one poor-quality photo¬graph. Its flanks featured St. John the Evangelist and St. James the Greater with benefactors. I believe this was the original predella of the altar of Lubina.

The question of who may have ordered the altar can be answered only hypothetically, on the basis of the depicted donors. One of them is to be found at the feet of Our Lady of Sorrows on the last panel of the Everyday side of the altar and two others are on the predella. They may represent the then owners of the Hukvaldy manor, under the dominion of which Větřkovice (present day Lubina) came under at the time. It is therefore possible that the altar was ordered in Wrocław by Beneš Černohorský of Boskovice the Younger and had his tow deceased brothers depicted on it: Dobeš Černohorský of Boskovice and Tas Černohorský of Boskovice, who had been the Bishop of Olomouc. The new altar, consecrated to the Virgin Mary, may have originally been meant for the parish Church of the Nativity of the Virgin Mary in Příbor or for the chapel at the Hukvaldy castle. Nonetheless, there is not enough archival evidence to support these assertions, so on this matter also we can only sp eculate.